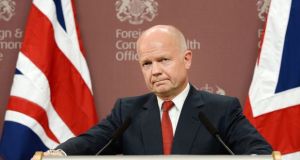 William Hague: “Somehow I went from being the outer edge of Euroscepticism to being a pragmatic centrist without moving.” Photograph: Andy Rain/EPA

A “late, thin” trade deal between the European Union and United Kingdom might be the best prospect now from trade negotiations, former UK Tory leader William Hague has said.

The British Conservative politician, now Lord Hague of Richmond, said that the EU was trying to have its cake and eat it when it comes to a deal on fishing with the United Kingdom.

Speaking on a webinar hosted in Dublin, the former British foreign secretary said that the EU needed to be “a bit more realistic” on the “vexed” issue of fishing if a post-Brexit trade deal is to be reached with the UK before the end of the transition period on December 31st.

Negotiations between the two sides are reaching a critical point this week as British prime minister Boris Johnson set Thursday as a deadline coinciding with the start of an EU summit.

Mr Hague challenged the view that there might not be much difference between a “late, thin” deal and no trade deal, which would be “very serious” for the car, agriculture and road haulage industries and “very serious” for “parts of the UK economy and indeed for the Irish economy”.

It would be easier to implement the Northern Ireland protocol – the arrangement within the already-agreed Brexit withdrawal agreement that prevents the return of a hard border on the island of Ireland – if there was a free trade agreement, he said.

“It is very important that that is implemented by all sides in good faith,” the former Conservative leader told the Institute of International & European Affairs, the Dublin think tank.

Mr Hague said that the Internal Market Bill, the UK government’s domestic law which it has said would break international law, was “not a good idea, to put it mildly”.

He is among five of six living former leaders of the British Conservative Party who have publicly voiced their opposition to the Bill, which threatens to violate the Brexit withdrawal treaty.

He noted how much he relied on international law every day when he was foreign secretary. He said he was pleased to “see a retreat” by some British ministers with changes to the Bill.

“Let us hope that a free trade agreement means that these proposed clauses become entirely superfluous,” he said.

To reach a trade deal, he said, both sides have to be “forward leaning and more constructive” to compromise on their differences on state aid, one of the contentious issues dividing the sides.

“Often the UK has been accused of trying to have its cake and eating it. Well that is rather the case of fishing and the European Union: recognising that Britain is leaving the European Union but still trying to insist on exactly the same fishing rights forever,” Lord Hague said.

“I don’t know if that is realistic. It is not politically realistic in the UK and so I do hope that there is some movement on that in the coming days.”

The EU wants a continuation of fishing rights in UK waters where European boats catch more than half their fish and shellfish.

A deal on fishing was more difficult to achieve because, while it amounted to just 0.1 per cent of the British economy, it was “politically and totemically important,” said the British politician.

Mr Hague, a long-standing Eurosceptic who voted to remain in the EU because of the consequences of the UK leaving the EU for Scotland and Northern Ireland, said that while he has not changed his views on Europe, British politics had shifted around him in the past 20 years.

“Somehow I went from being the outer edge of Euroscepticism to being a pragmatic centrist without moving and that was because the whole political spectrum moved past me, leaving me in a quite different position,” he said.

“That is my claim to consistency.”