State to buy 5,000 acres in Dublin mountains from Nama 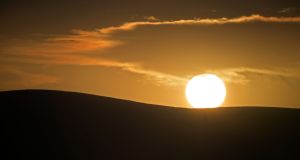 The State is expected to buy almost 5,000 acres at Glenasmole Valley in the Dublin mountain from Nama. File photograph: Eric Luke/The Irish Times

The State is expected to buy almost 5,000 acres at Glenasmole Valley in the Dublin mountains, currently for sale by the National Asset Management Agency (Nama).

The 4,900 acres, most of which lie within a special area of conservation and a special protection area, are surrounded by 200,000 hectares of the Wicklow Mountains National Park, Ireland’s largest national park.

The site, above the Glenasmole reservoir, includes land known as the Featherbeds.

It is understood negotiations are at an advanced stage, and while Nama valued the land at €500 an acre with an overall price of €2.5 million, the State is likely to purchase the land at a reduced rate.

Some estimates put the final sale value at €1 million.

In a statement last night the Department of Heritage said Mr Ring remained hopeful that a “satisfactory conclusion could be reached”.

Mr Ring said in the Dáil last week that he was worried “about Nama’s valuations with regard to this particular piece of land”.

The Mayo TD, who has special responsibility for regional development, said he wanted to “put on the public record” his concerns at the price Nama was seeking, particularly given its conservation status.

He said he would have to talk to the Minister for Finance.

Mr Ring was responding in the Dáil to Green Party leader Eamon Ryan, who raised the issue and expressed concern that Nama was selling land which he believed should be kept in State ownership.

“[It] is a stunning wilderness and there is nothing there – not a shed and hardly a fence,” Mr Ryan said. “ It is a wildlife reserve to match any other.”

The Dublin Bay South TD said 93 per cent of the site was part of Co Wicklow’s special area of conservation “and one can do nothing with it, such as put up a wind farm or buildings”.

Nama acquired the site after a developer involved in Dundrum Shopping Centre got into difficulties. Negotiations with the agency began after Mountaineering Ireland raised concerns about the site.

In June it emerged that an auctioneer had been appointed to seek bids for the land, at which point Mr Ryan raised it in the Dáil, expressing concern if a private bidder came in the price could increase to €3 million or €4 million.

In its statement the department said because the land was a special protection area it was “a very important site for nature conservation”.

It said Mr Ring was of the view that “that given its closeness to Wicklow Mountains National Park and its importance for nature conservation as an SAC [special area of conservation] and SPA [special protection area], the land in question would be very important to the national park”.