Fine Gael has pledged to keep wages rising and to create 200,000 new jobs between now and 2025 at the launch of the party's four part economic plan. Video: Bryan O'Brien 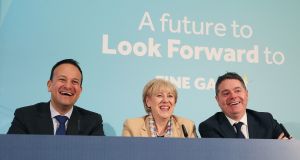 Fine Gael promised higher wages, tax cuts, record levels of investment, a bigger and better paid public service while running a surplus in the public finances, as it sought to focus attention on the economy on the third day of the general election campaign.

Taoiseach Leo Varadkar, Minister for Finance Paschal Donohoe and Minister for Business Heather Humphreys highlighted Fine Gael’s record of economic management against what they said were the “boom-bust” record of Fianna Fáil, as Fine Gael continued the attacks against its chief rival.

Asked what would be Fine Gael’s priorities in the event of a slowdown in corporation tax receipts or a sudden hard Brexit at the end of this year, Mr Donohoe said that the surpluses that he would budget for would take care of any shortfalls. In the event of a slowdown, he said, he would allow the projected surpluses to fall. In addition, he said, capital investment would not continue to rise at the current rate.

Fine Gael would budget for a cash surplus of €3.8 billion by 2021, Mr Varadkar said. He also said that Fine Gael would “relax the debt rule”, allowing for more borrowing in the event of a hard Brexit.

Mr Varadkar acknowledged that in the event of an “unforeseen calamity”, its plans would be reviewed.

Later, Mr Donohoe indicated that the party’s tax plan, expected to be revealed next week, would see the threshold for paying the higher rate of tax increase to €50,000 over the five years of the next Dáil.

Ms Humphreys insisted that Fine Gael would not repeat the mistakes of Fianna Fáil, who she said believed that the good time would go forever.

Asked about Fine Gael’s record of managing public investment projects such as the National Children’s Hospital, Mr Donohoe acknowledged that the Government had made mistakes. “There were things that I got wrong,” he said.

However, Mr Varadkar said that “the only money truly wasted was the €35 million wasted by Fianna Fail trying to build the National Children’s Hospital on the Mater site ... That is money we will never see again.”