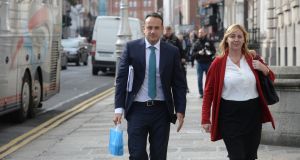 The disclosure that the “cost-neutral” Strategic Communications Unit will cost €5 million in 2018 has prompted a notification to the Standards in Public Office Commission (Sipo).

Labour Leader Brendan Howlin has written to Sipo on Thursday raising two points about what he has portrayed as Taoiseach Leo Varadkar’s “personal spin operation”.

Mr Howlin has asked Sipo to clarify if a significant quantity of social media advertising on behalf of the Taoiseach’s Department amounts to an improper use of public funds for political ends. He has also queried if the staff recruited to serve in the Unit have been recruited under the Public Service Management Act.

He said he wrote to the Secretary General of the Government last week on these issues and was awaiting a response. He said the disclosure of the €5 million allocation for 2018 in the intervening period required an intervention by Sipo.

The Government has not provided a detailed breakdown of the € 5 million that has been allotted for 2018 to the new Strategic Communications Unit in the Department of the Taoiseach.

In response to a request from The Irish Times seeking a breakdown of the allocation for next year, the Department responded with a general statement outlining the work of the unit.

“The majority of the budget for 2018 is earmarked for cross Government public information campaigns, which will help people to be more aware of the work of Government and the services they are entitled to.

“Furthermore, it is envisaged that the establishment of the Strategic Communications Unit will lead to much more efficient and effective communications expenditure across Government,” said the statement.

When the unit was first announced the Taoiseach said it would be cost neutral. However, the expenditure documents accompanying this year’s Budget showed that the 2018 cost would be €5 million.

The Government has maintained the unit will coordinate publicity and marketing campaigns across all Government Departments and agencies, which cumulatively cost €170 per annum. That coordinating function, Government sources maintained, will lead to savings of at least €5 million, as duplication will be avoided.

The unit will be headed by John Concannon, who oversaw the Government’s centenary commemoration of 1916 and was also spearheaded the Gathering in 2013 and this year’s Culture Ireland initiative. The other senior official in the unit is Andrea Pappin, who is already working in the Department of the Taoiseach.

However, the Government Information Service (GIS) provided no details as to how the non-staff expenditure will be spent other than to say the bulk of the spending would be spent on public information campaigns.

The unit has been strongly criticised by Opposition parties, who have alleged it will be used to promote political propaganda.