Sinn Féin to amend its stance on abortion 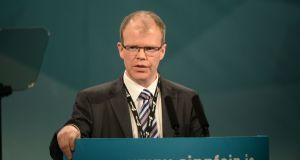 Meath West TD Peadar Tóibín, who is against abortion, says his cumann will be tabling a motion calling for a free vote. Photograph: Dara Mac Donaill

Sinn Féin is to agree an amended position on abortion at its Ard Comhairle next Saturday, allowing for terminations when a mother’s health is at risk.

The party currently advocates for a repeal of the Eighth Amendment of the Constitution and enacting legislation to allow for abortion in cases of rape, incest and fatal foetal abnormality.

However, The Irish Times has confirmed the Ard Comhairle will expand that to include terminations to protect the life and health of the mother.

The decision will go to the party’s ardfheis next weekend for acceptance and will become the official position for the referendum campaign.

The clár (programme) for the conference contains a number of motions on the Eighth Amendment but the Ard Comhairle position will take precedence and all others will fall.

Some will call for “free, safe and legal” abortion, others will seek to protect the Eighth Amendment and one will seek the party members, including TDs, to be allowed a vote of conscience on the issue.

Meath West TD Peadar Tóibín, who is against abortion, says his cumann, the Doyle/French cumann from Navan, Co Meath, will be tabling a motion calling for a free vote.

Mr Tóibín previously lost the Sinn Féin whip for six months after voting against the Protection of Life During Pregnancy Bill in 2014, contrary to party policy.

Similar motions calling for free votes have been rejected by Sinn Féin members at previous ardfheiseanna. It is expected this will be opposed too.

This year’s ardfheis takes place on the weekend of November 17th and 18th.

A special Oireachtas Committee is currently holding hearings on the Eighth Amendment to the Constitution – which provides for an equal right to life to the mother and the unborn – and is expected to propose a wording for the referendum by Christmas.

The party’s position will be crucial as the Oireachtas committee examining the Eighth Amendment considers its final report.

One of the party’s representatives on the committee, Jonathan O’Brien, has confirmed his position has changed since the deliberations began.

The Sinn Féin TD for Cork North Central described himself as pro-life when he joined the committee.

However, he has now stated he is in favour of repealing the Eighth Amendment of the Constitution.

Mr O’Brien said he had an open mind going into the meetings and having “listened to the expert advice” he has changed his position and now believes “full repeal is what is in women’s best health interests”.

Elsewhere, Fine Gael will have a discussion on the matter at its national conference in Co Cavan today. Minister for Health Simon Harris will address the meeting but no official party position will be taken.