What can we expect from Leo Varadkar’s keynote speech?

Taoiseach will talk about Republic of Opportunity, but won’t mention rival parties 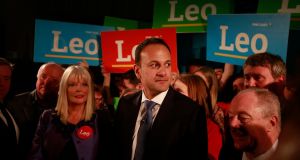 Leo Varadkar during his leadership campaign launch earlier this year. Friday night’s speech at the Fine Gael National Conference will be a test of his appeal to younger voters. Photograph: Nick Bradshaw

At the Fine Gael “think-in” in September, Taoiseach Leo Varadkar took a slight cut at his predecessor Enda Kenny by saying his ardfheis speeches were “iffy”.

The truth is that Varadkar could have said exactly the same about most political leaders of the past two decades.

Modern Irish politicians tend not be Obama-like orators or Trumpian firebrands. Unless Emmanuel Macron sprinkled him with magic dust during his visit to France, Varadkar’s first speech to the party faithful will be not be markedly different from those of Enda Kenny, Micheál Martin, Eamon Gilmore, Bertie Ahern or Gerry Adams.

In an era of media control, speeches are co-written by a cast of thousands. They are then scanned endlessly by Geiger counter to take out anything that might be slightly radioactive. Most speeches tend to be formulaic and utterly forgettable, designed to give reassurance to the already converted. The biggest win will be that one soundbite might stick, or – perhaps more importantly – that the speech will remain gaffe-free.

There will be a good illustration of that just in advance of Varadkar’s speech on Friday night. The party will play a short video tribute to Liam Cosgrave, the former leader and taoiseach who died this year.

In the altogether more febrile and partisan atmosphere of ardfheiseanna until the 1980s, Cosgrave had no scruples when it came to attacking his enemies. Responding in 1977 to his critics, the British-born journalist Bruce Arnold and the South African-born academic Kader Asmal, Cosgrave was particularly scabrous: “Not for the first time, this party has stood between the people of this country and anarchy. Remember those people who comment so freely and write so freely. Some of them are not even Irish.

“No doubt many of you are familiar with an expression in some parts of the country where an outsider is described as a blow-in. As far as we care concerned they can blow out.”

Five years earlier, in 1972, he referred to internal critics within Fine Gael as a “den of mongrel foxes”.

Charlie Haughey used to do the same at Fianna Fáil, whipping up the tribal instincts by playing the green card in his speeches. The most memorable was: “Northern Ireland is a failed political entity.”

Nowadays, leaders tend to steer clear of that kind of rhetoric – the roustabout stuff is left to the warm-up speaker who takes crowd-pleasing potshots at political opponents. Heather Humphreys, a Cavan local, will fulfil that role at the National Conference on Friday night.

Varadkar’s speech will be devoid of personalised attacks. Indeed, there are indications he will try to move away a little from the traditional format.

In that vein, he will try to minimise the passages on what Fine Gael has achieved to a few lines rather than devoting whole sections in the middle of the speech to it, as normally happens. And, in marked contrast to the pointed criticisms of Fine Gael and Sinn Féin in Micheál Martin’s speech a fortnight ago, the Taoiseach’s speech will be devoid of references to either party. It will make for slightly strange listening.

So what will the speech say? A Fine Gael Minister, when asked would it contain surprises, responded by saying: “I would not think so. More RoO, really.”

When asked what RoO meant, the reply was: “Where have you been? Republic of Opportunity.”

Indeed, RoO has been the big Varadkar theme this autumn and will be a major component of his speech. On Saturday afternoon, the party will publish a 45-page draft document setting out the Republic of Opportunity vision.

The kind of thinking that will inform Varadkar’s speech is contained in two documents from this year. The first is Taking Ireland Forward, the policy ideas paper he published during the leadership campaign with Simon Coveney. The second is a more recent piece setting out 10 goals for the next 10 years.

Since entering politics, Varadkar has made a virtue of the fact his connection with Fine Gael was ideological and not familial and that he is an issues politician. Strategic thinking is a strong suit and he puts huge store in Fine Gael “values” and ideals, as well as long-term thinking.

“I believe Fine Gael can articulate a message that will resonate and inspire. It can also be popular, and prove that a political message can be successful without any of the crude populism that has tainted politics in some countries around the world,” he wrote in Taking Ireland Forward.

Later in September, he wrote: “We are thinking about the next 10 years and also about the next 20, because we need to plan for an Ireland that in 2040 will be home to more than 5.5 million people. We share the ambitions of many of our citizens, who work hard, and we recognise that we must do more to ensure that they and their families can plan for the future with confidence.”

And so this is the milieu for the RoO, a set of policy ideas and values that will be set out over the course of about 25 minutes. There will be elements for party traditionalists – he will emphasise its credentials as the party of law and order, and also of the party of enterprise and of low taxes for work.

To that he will add new values that resonate more with his generation, and the millennials which the party hopes to attract. They include personal liberty and equality, a more democratic Europe, being more focused on the environment, and being more compassionate to the most vulnerable.

It will be slightly strange to have a leader’s address on a Friday night, leaving a sense of anti-climax on Saturday

In terms of policy, Varadkar has a lot of long-term ideas, some of which will find their way into the speech. They include doubling Ireland’s diplomatic footprint around the globe; making Dublin one of the world’s biggest financial centres, and creating new special ambassadors for climate change, human rights and women’s issues. He also wants to create an SSIA-type savings scheme for those on private pensions.

His view on cities is that apartment living is the way forward and that vibrant new communities could spring up in places like Waterford’s North Quays; Dublin’s Pigeon House and Galway’s Inner Harbour.

The 10-year capital plan is also a fundamental component, with a high-speed railway to Belfast, the Dart going to Leixlip and Drogheda, and a new motorway to Derry. Longer-term, he is still envisaging universal health care, the possibility of shared sovereignty with the North, and a free trade agreement between the EU and UK if Brexit occurs.

His challenge will be to present that argument and then find a phrase or soundbite that will encapsulate it – definitely not “the party for those who get up early in the morning”.

It must be remembered that Simon Coveney won the membership vote. But this is not the Fianna Fáil of Charlie Haughey versus George Colley. Varadkar will carry the crowd on Friday night.

It will be slightly strange to have a leader’s address on a Friday night, leaving a sense of anti-climax on Saturday. Still, the scheduling could give a bigger viewership than the usual 200,000 for these events and allow a pitch at a new audience. As Fianna Fáil Senator Lorraine Clifford-Lee mocked, it will be, if nothing else, a Republic of Photo Opportunity. But that appeal and sellability to younger voters was what helped Varadkar win the leadership race so convincingly. We will see one of the first tests of that on Friday night.