Adams believes women should have right to abortion 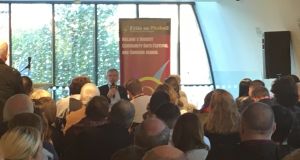 Sinn Féin president Gerry Adams was speaking at the launch of his new book in Belfast. Photograph: Amanda Ferguson

Sinn Féin leader Gerry Adams has said his personal view is that it should be a woman’s right to choose whether to have an abortion.

The party has faced criticism from pro-choice activists for supporting a rights-based agenda in the Stormont talks but only extending its support for abortion reform in the cases or rape and fatal foetal abnormalities, which leads to views it only supports the rights of “worthy women”.

Responding to this suggestion at the Belfast launch of his new book Never Give Up, he said: “Our party has been very clear on this issue for a very, very long time.

“It should never have been in the constitution in the first place and it should be replaced by legislation which reflects our party position.

“My personal position is that it is up to women.

“Women have to have the right in all of these situations but as a party member I can only support the position which the party has worked out over a very, very long time, which as I say, I think reflects wider society.”

He confirmed from a personal point of view he believes it should be a women’s right to choose.

“I very clearly have my own position on all of these issues but I am not going to have the opportunity of needing to have an abortion, why should I decide?

“I am a lawmaker, I have to make the law in terms of satisfying the rights of women and also of the doctors.

“The doctors and the medical staff should have their very, very clear supremacy if you like, on all of these issues.

“The fact women every single day go to England for abortions is just not acceptable.”