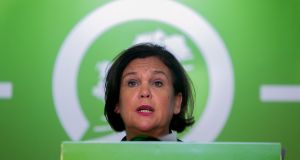 Mary Lou McDonald told Sipo: ‘The donation that you refer to was not offered to, or accepted by, the Sinn Féin party in the 26-county jurisdiction’. Photograph: Gareth Chaney/ Collins

Sinn Féin president Mary Lou McDonald told a State watchdog it had no authority to scrutinise donations made to the party in Northern Ireland on the grounds that Sinn Féin operated on “a six- and 26-county basis”, newly released correspondence shows.

The Standards in Public Office Commission (Sipo) wrote to Sinn Féin last year seeking clarity about the execution of the will of an English man who left an estate worth up to €4 million to the party. The donation by William Hampton is the largest ever received by a political party on the island of Ireland.

Writing from Leinster House, Kildare Street, Dublin, Ms McDonald told Sipo: “The donation that you refer to was not offered to, or accepted by, the Sinn Féin party in the 26-county jurisdiction”.

The donation from Mr Hampton was received by “the Sinn Féin party, registered in the six counties, with the British Electoral Commission”.

However, she said Sinn Féin in the “26 counties” would continue to adhere to the regulations in the 1997 Electoral Act.

The stance has led to accusations that the Sinn Féin is using the Border as a means of circumventing the Republic’s stricter controls on political donations.

In the Republic, the maximum donation that can be accepted by a political party is €2,500. Parties cannot accept donations from persons who reside outside the State unless they are Irish citizens.

In the UK, there is no limit on the donations that can be made to political parties by persons who are on the UK’s electoral register.

The Labour Party’s finance spokesman, Ged Nash, said Sinn Féin was now “the richest political party on this island” and a bigger employer than most small and medium-sized businesses.

“It is an anti-partition party using partition to its own advantage, so as to shelter huge amounts of cash on one side of the Border, away from proper scrutiny on the other side.”

The UK Electoral Commission’s website shows that in the period from April of last year, £2.1 million (€2.3 million) was declared by Sinn Féin in Northern Ireland as having been received from Mr Hampton.

The money was lodged in six separate round figure donations as Sinn Féin’s director of finance, Des Mackin, progressed the realisation of Mr Hampton’s estate. The last donation listed was in March.

It is understood the realisation of other parts of the Hampton estate, involving property in the UK, has been delayed by the Covid-19 pandemic.

The Hampton money constitutes more than three-quarters of the £2.74 million declared by Sinn Féin in Northern Ireland since the beginning of 2019, with the bulk of the rest of the money coming from the NI Assembly and the House of Commons.

‘Sinn Féin in the Republic’

Mr Hampton, who died in a nursing home in Wales in 2018, swore the will in 1997 while living in the Republic.

He left the bulk of his estate “in trust for the political party in the Republic of Ireland known at this time as Sinn Féin”.

The executors were then joint national treasurers of Sinn Féin – Mr Mackin and Joe Cahill (who died in 2004).

In a grant of probate dated March of last year, the probate registry in Wales granted recognition to Mr Mackin, saying that it “appears from information supplied on the application of this grant that the gross value of the said estate in the United Kingdom amounts to £2,599,605”.

In his will Mr Hampton refers to assets he has in Ireland, England, Singapore, New Zealand “and other assets I may have anywhere else in the world”.

In September of last year, the Labour Party wrote to the commission raising concerns about the Hampton donation, and Sipo decided to write to Sinn Féin. The ensuing correspondence, and other Sipo documents released to the Labour Party by Sipo on foot of a Freedom of Information request, have been shared with The Irish Times.

The commission wrote back to Labour in November 2019 saying it had received clarification that the estate had not been “offered to or received by the Sinn Féin party on the Register of Political Parties in this jurisdiction”.

Donations made to political parties in Northern Ireland for the purpose of funding political activities there were not subject to the provisions that govern political donations in the Republic, it said.

Ms McDonald had written to Sipo the previous month, the correspondence shows, saying her party was organised on “a six- and 26-county basis”, and complied with all funding regulations within both jurisdictions.

In response to Sipo’s decision that the donation was not subject to the Irish political funding regime, the general secretary of the Labour Party, Brian McDowell, said in a letter in December that the position adopted by the commission “seems to amount to an assertion by you that, in fact, there exist two separate Sinn Féin parties on this island”.

He said if the party was to be allowed “to claim to be British, or Irish, or both, when it comes to political funding rules, and thereby succeeds in circumventing our funding laws by directing donations to the jurisdiction of its choice, why should other parties registered here not avail of the same opportunity”?

He repeated the observation he had made in his initial letter to the commission in September, that Mr Hampton had stated in his will that he was leaving the money to Sinn Féin in the Republic of Ireland.

In a background note on Mr McDowell’s letter, prepared for a meeting of the commission on January 13th last, Mark Shanahan of Sipo’s complaints and investigations unit, said the body had never asserted that there were “two separate Sinn Féin parties”.

As to the will stating that the money should go to Sinn Féin in the Republic of Ireland, Mr Shanahan noted: “That matter was not addressed as the commission does not have any role in the execution of the will.”

At the January meeting, the commission considered the briefing note and asked that it be provided with “a legal analysis of the status of political parties that operate in both the Republic and Northern Ireland”, according to the minutes of the meeting.

“The analysis should look at how such parties are governed and what, if any, is the legal distinction between parties that are registered on both sides of the Border.”

A spokeswoman for Sipo would not comment about the legal analysis commissioned on political parties that operate on both sides of the Border.

However, in its latest annual report, published in July, the commission included a short note on the matter.

“There is nothing illegal about a party that is, for organisational purposes, a single entity, having statutory obligations in more than one jurisdiction.

“Given the differences in statutory requirements, this may have the practical effect of sometimes benefitting or disadvantaging a party,” the note said.

The commission recommended that the issue be explored further by an electoral commission, once one is established.

Mr Nash said he was preparing a Private Members’ Bill on reforming the political funding rules, and called on Sinn Féin to support an all-island approach.