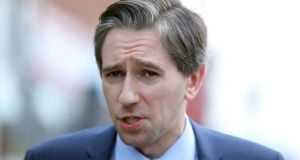 The Government will agree further nationwide restrictions tomorrow to stem the spread of coronavirus infections, Minister for Further and Higher Education Simon Harris has said.

The National Public Health Emergency Team (Nphet) has twice called for the State to move the Level 5, the highest level on the State’s Living With Covid plan, although Ministers have to date resisted such a move.

Most counties are currently on Level 3, with three of the Border counties - Donegal, Monaghan and Cavan - on Level 4.

But signalling a likely move to at least Level 4 restrictions, Mr Harris said the Level 3 measure “has not worked in terms of getting the virus to where it needs to get to”, and the trajectory of the virus is concerning health officials.

“It is clear now that the virus is at such a level within all our communities the county-by-county approach will not be sufficient so tomorrow we will have to bring in more restrictions.”

Under Level 4, people should not have any visitors to their homes, the maximum number of attendees at a wedding is six, non-essential retail will close, and all non-essential workers must work from home. Wet pubs, cafes and restaurants can only seat a maximum of 15 people outside.

Schools and creches will remain open while higher education will take place primarily online. Gyms will close while construction and manufacturing will remain under the right conditions.

Different to March and April

Mr Harris said senior Government Ministers heard briefings on Saturday from the Nphet and the HSE on Saturday for four to five hours on the health concerns but they also heard about the effect of the lockdown earlier this year on society, such as a spike in domestic violence.

“This is different to March and April. We are asking people to take more restrictions for a second time, and we are having to balance that with our honest view as to what people can sustain and bear, but we will act tomorrow,” he said.

Asked about the possibility of keeping some businesses open, Mr Harris said that the Government could not “prolong the inevitable” or do things “in a piecemeal fashion”.

“If we are going to try to get back on top of this virus, we are going to have to take decisive action tomorrow and what Government is trying to do is to find that landing spot as to what is enough to get us to where we want to be as well as recognising lots of different demands,” he said.

A meeting of Government leaders broke up last night without any decision on the level of restrictions to be put in place in the country.

There is no Cabinet meeting scheduled for Sunday, with Cabinet to meet on Monday to discuss the next steps.

Senior sources said that on Saturday six of the most senior politicians in the State examined the options available to the Government and the implications of the decisions to be taken, amid concerns over the rate of growth of the coronavirus in the Republic.

The meeting was preceded by a private consultation between the State’s top two public health doctors and the Taoiseach, Micheál Martin. There were briefings provided by senior members of the National Public Health Emergency Team (Nphet) and HSE chief executive Paul Reid.

‘A whole range of variables’

Speaking as he left the meeting on Saturday night, Green Party leader Eamon Ryan said the Government shares concerns around the increasing numbers, which he said are also occurring across Europe and the rest of the world.

“Government has to balance up a whole range of variables. Yes we have to look at the impact of the virus but also the impacts in so many different ways on society and how we respond to it,” he said.

A Government press statement following the meeting said presentations were given on the situation across the country concerning the virus as well as on the economic, employment and society wide implications of moving to more severe restrictions.

“The health team briefed Ministers that children were safer in schools, transmission rates are low, and that the continued opening of schools is very important to the development and wellbeing of children and young people,” the statement said.

While no decisions have been taken, there is a growing expectation among some Cabinet Ministers that the country will be moved to a higher level of alert in the coming days, but that it will fall short of the Level 5 for six weeks recommendation made by Nphet.

Sources said that pushback is expected over implementing some elements of Level 5, such as the closure of some sectors of the economy, and the stipulation that people must not travel more than five kilometres from their home. The six-week duration recommended by Nphet is also likely to be resisted.

A briefing of Fine Gael Cabinet Ministers by Tánaiste Leo Varadkar, scheduled to take place at 7pm on Saturday, was pushed back to 11am Sunday.

The two Nphet members, alongside Prof Philip Nolan, who is also on the team, gave a presentation to the wider group of senior politicians which continued for several hours. Mr Reid also briefed the group.

It is understood a range of presentations and discussions were held on epidemiology, economics, the capacity of the healthcare system, mental health, communications as well as the impact of restrictions on households, including domestic violence, younger people and the impact of isolation.

It came as senior backbench TDs in Government parties raised concerns over the prospect of moving to Level 5. Barry Cowen, the Offaly TD and former minister for agriculture, tweeted on Friday that the State should “retain Level 3, work with it, implement it, adhere to it”.

He added: “Moving to 4 or 5 is running and hiding from Covid.”

Senior Cabinet figures have privately indicated deep concern about moving to Level 5, with the impact on the economy foremost in their minds. There are also concerns that recently announced restrictions have not had a chance to bed in, and that there could be conflict with teachers unions if schools were to remain open.

James Lawless, the Fianna Fáil TD for Kildare North, told The Irish Times on Saturday that if Level 5 is introduced, oversight of the schools system by the Health and Safety Authority (HSA) should be increased by making Covid-19 a notifiable disease. Once a case of a notifiable disease is made to the HSA, an inspection follows, he said.

“Whilst transmission among pupils remains low, schools are also a workplace and the relevant legislation should be amended to make Covid-19 a notifiable event. We have tens of thousand of teachers on the front line and they deserve same protections as other sectors,” Mr Lawless said.

While the overall mood of the Cabinet is against a move to Level 5, some sources on Friday indicated that an increase in restrictions may meet less resistance at the Cabinet table due to the levels of virus circulating.

Government TDs on Saturday expressed mixed views on the prospect of moving to Level 5. One Fine Gael TD said the Government is “damned if we do and damned if we don’t, the virus is getting out of hand, if the trend continues there may be no other option”.

A Fianna Fáil TD said that measures introduced during the week should be given a chance to bed in, and that the impact of Level 3 restrictions introduced in recent weeks would only become apparent this weekend. The TD said the Government should wait, but review the situation in the middle of next week.

“The Government is handling this badly now. We have to make political decisions as well as medical decisions,” he contended.

“My recommendation is we should go back again to Level 2 where at least we have a bit of normality.”

He said that going to Level 5 is not “living with Covid” and urged that Government “wake up” to the impact of the measures.

“It is, in effect, a lockdown,” he said. “In deciding what level to move to we need to consider the repercussions of moving to Level 5. It will have a very negative impact on the lives of young people and mental health.

“At some stage we have to wake up to the damage that we are inflicting on the lives of young people. Their education, employment, pastimes, entertainment and relationships have all been stopped or severely damaged by the restrictions, and they will be damaged even more by moving to Level 5.”