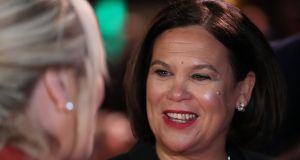 Like all Opposition parties, Sinn Féin has put housing and health at the centre of its pitch to voters. But the party also has another message which is unique to it: it wants the next government to launch a full-scale push for a united Ireland by 2025.

Speaking at the party’s candidate launch last week, leader Mary Lou McDonald said Irish unity must be at the centre of everything the party does from now on.

“Irish unity is the best idea for the future of the country,” she said. “Let’s have an all-Ireland forum on unity to plan for all aspects of reunification, including a referendum by 2025.”

She reiterated those coalition red lines on RTÉ on Sunday. McDonald has been beating the unity drum since she became leader, judging that the United Kingdom’s impending exit from the European Union has given the constitutional question a prominence it did not previously enjoy.

In her ard fheis speech in Derry in November, McDonald made her position clear: “If we have the chance to deliver housing and healthcare, to stand up for people and deliver a fair deal for families, to deliver on Irish unity, then that is the only basis on which Sinn Féin would enter government.

“The referendum must happen in the next five years,” she told a cheering audience. “Let the people have their say!”

It is the determination that the next government must prioritise a push for Irish unity that is likely to be the biggest barrier to any coalition negotiations with either Fine Gael or Fianna Fáil after the next election. Both Leo Varadkar and Micheál Martin made their opposition clear in last week’s television debate.

To sell a coalition deal to its supporters, the Sinn Féin leadership would need a commitment to push for Irish unity enshrined at the centre of any programme for government. The party would be likely to require tenancy at the Department of Foreign Affairs, a white paper on Irish unity and a citizens’ assembly to promote the policy. It would push the policy not just with the British government but with the devolved administration in the North – or at least those parts of it controlled by Sinn Féin.

It is, to put it mildly, highly unlikely that either Fine Gael or Fianna Fáil would agree to any of this. Their view of Irish unity is considerably more gradual and longer term. So they are unlikely to go into coalition negotiations that would collapse on the unity question.

The question of who controls the Sinn Féin leadership raised by the cash-for-ash inquiry is a concern for Fine Gael and Fianna Fáil and they claim policy incompatibility with the Sinn Féin platform. But the insurmountable barrier to coalition is likely to be the unity issue and its timetable.