Green Party must be ‘open’ to coalition with major parties – Ryan 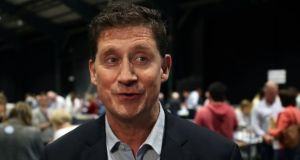 Green Party leader Eamon Ryan has set his party on a firm path to coalition after the next election by saying it “must be open and prepared to enter government”.

In his keynote speech to the party’s national convention in Dublin, Mr Ryan has argued that entering government was the most effective way to address the climate emergency.

Referring back to the Green’s first experience in coalition, which saw the party losing all its seats in 2011, Mr Ryan said: “I know from experience how hard that can be but also what can be achieved. To prepare properly it is important to set out the principles that we would approach any programme for government negotiations.”

He said the party should be willing to talk to any party who shared its core belief in constitutional, democratic and peaceful politics.

He also lambasted the Government’s transport policies for favouring cars and road development and called Fine Gael and Minister for Transport Shane Ross “a waste of space”.

“Their only road map is to build yet more roads. Their only climate initiative is to switch from fossil fuelled cars to ones powered by a battery. They are blind to the unsustainable sprawl, long distance commutes, and gridlock,” he said.

Earlier Mr Ryan’s preference for the Greens to be a voice in government received strong backing when a motion calling for any coalition with Fine Gael or Fianna Fáil to be ruled out was heavily defeated by delegates at the convention, being held in the Law Society in Dublin. A strong intervention during the debate by party chair Roderic O’Gorman who said he did not want to play “safe” by staying out of government was seen as having swayed some delegates.

Setting out his thinking, Mr Ryan said the situation was now so urgent that action needed to be taken now.

“The scale and speed of change we need to make is so great that we have to make sure that at least the next five governments in a row are bought into taking real climate action.

“Stop-start policies will not work and the story behind the transition is that every person and every place matters. We should not be ruling out people on the basis of how they vote.

“We will not make the leap we need to make if we allow this to become a politically divisive issue. We should celebrate rather than worry about people stealing our political clothes.”

Another principle, said Mr Ryan, was for a just transition. “Ecological transition has to also deliver real social justice. The old story that the market knows best and economic growth is the measure of success is shot.”

He also emphasised the party’s tradition of consensus and working together as a team. “We don’t run away from hard decisions or run to the media every time there is an opportunity for some spin.”

The debate on coalition illustrated a slight generational bias with younger members such as Saoirse McHugh and Lorna Bogue arguing trenchantly against any agreement with Fine Gael or Fianna Fáil. They also argued the party should identify itself as “explicitly anti-capitalist”. That was amended by delegates to “explicitly antineoliberalism”.

A capacity audience of 400 people attended the event, which has come less than two months after the party quadrupled its council seats to 49, and also won two seats in the European parliament.

In his speech, Mr Ryan pointed to the party working to form coalitions on every council it had strong representation on, to give effect to is policies on planning, transport, the environment and sustainability. He said its goal of switching the transport policy to favour a ratio of two to one in favour of public transport would start locally.

He praised some aspects of the climate action plan but said it had failed in a number of areas but said it was “weaker when it comes to changing land use in our country.

He said the industrial model of farming being promoted by Fine Gael need to be challenged. He contended the current practice was impacting ordinary farmers who were “only getting a bargain basement commodity price.”

Deputy leader Catherine Martin told delegates that being green meant standing up for biodiversity but also for social justice.

“We are working for a caring compassionate Ireland,” she told delegates.