The event in hip Dublin 7 includes yoga, a biodiversity talk and some radical motions 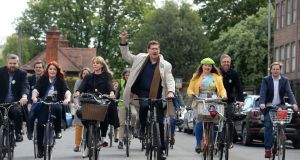 It’s an indication of the Green Party’s current popularity that its national convention this weekend is a sell-out gig.

The convention was planned early in the year for the Law Society in Dublin – a venue with a modest capacity of 400, perfect for a party with modest ambitions.

But its phenomenal success in the local and European elections changed all that. The party’s membership has more than doubled in the past year and, if capacity allowed it, its convention could have accommodated considerably more than 600 people.

While its national vote share was a little over 5 per cent in the local elections, the party peaked on double figures in a lot of those marginal, and more affluent, urban constituencies where it can make gains. It has quadrupled its number of councillors to 49, and has two MEPs for the first time in two decades.

It also looks poised to win anywhere between six and 10 seats in the next general election, mainly in Dublin but also in Wicklow, North Kildare, Cork, Galway and Waterford.

The attendance and the upbeat atmosphere this weekend is a far cry from the nadir in 2011 when it lost all its Oireachtas seats, lost its State funding and was reduced to three county councillors nationally.

At its annual convention in Kilkenny in 2012 there were about 150 delegates in total, and outsiders questioned if the party had any future.

But even then there were the germs of revival. Every year there was a smattering of new members, young people who had joined solely on ideological grounds and didn’t care that the party had gone into coalition with Fianna Fáil.

An upshot of that revival is that – along with the Social Democrats – the Greens’ convention will feel much younger than the national conventions of other parties.

The Greens being the Greens, it is taking place in hip Dublin 7, at home among the tattoos and the man-buns. There will be dinner with extensive vegetarian options, a session on bees, birds and biodiversity, and a yoga session “designed to connect and align our core beliefs with the core of the planet” , in the flower garden of the Law Society on Sunday morning.

In there too are a few novel and provocative motions, which won’t make a huge difference to emissions but will send out a powerful message of intent. The most eye-catching calls for a ban on private jets. “The Green Party cannot support the lifestyle of the super wealthy and therefore calls for non-diplomatic private jets to be denied permission to enter Irish airspace.”

The generational imperative is reflected in some of the idealistic motions that have been tabled for the convention. This has the potential to create, if not divisions, a frisson.

On the one hand there are younger members who do not want to compromise on radical responses to climate change. That sentiment was encapsulated by its European candidate in Midlands North West, Saoirse McHugh, who caused a stir when she said she would leave the party if it went into coalition with Fianna Fáil or Fine Gael.

McHugh’s Mayo branch has tabled a motion calling on the party to identify itself as explicitly anti-capitalist. “Capitalism is incompatible with the survival of the majority of the life of the planet,” it states.

Another motion from the UCC branch proposes a rejection of any “right-wing parties”. That includes Fianna Fáil, Fine Gael “or any party whose values or policies conflict with the Green Party”.

Such a direction would be difficult to swallow for other members, and this includes party leader Eamon Ryan. For them, there is no possible scenario for government other than coalition with Fine Gael or Fianna Fáil. A left alliance is admirable but highly aspirational and not grounded in any sense of reality.

By rejecting the two big parties, the party would be ruling itself out of government. And if the Greens don’t go into government, they won’t be able to effect any change, or begin the urgent task of tackling the climate emergency.

In a sense it’s a reheating of the eternal debate between the “realos” (realists) and the “fundies” (fundamentalists) who dominated the party in the first two decades of its existence.

In truth, the vast majority of party members aspire to a radical restructuring of society and the economy. Rather, the divisions relate to the means, and the pace, of pursuing those goals.

If you are looking for near-unanimity in the party’s outlook, there is another motion which has called for a move away from measurements such as economic growth and GDP towards “degrowth” or a “steady state economy”.

That echoes a fundamental tenet of the party that the only way to reverse climate change is to discontinue the obsession with growth and wealth, and to focus instead on a circular economy, where people lead more modest, more local, less materialistic, and more sustainable lives.

There is no doubt the party is in a strong position to make big gains in the next general election. The question that could be settled this weekend is if it’s to be a party of opposition or of government.

The Green Party has both strengths and vulnerabilities. It has tended to perform better in second-tier votes, such as local council and European elections, than in Dáil Éireann elections. Even when the party’s national support hovered at around 2 per cent and Nuala Ahern and Patricia McKenna were MEPs, it had few TDs.

In the 1990s, when there were allegations of corruption and brown envelopes at local level, the Greens seemed the cleanest, most ethical party in Ireland. Yet leveraging that into Dáil seats was difficult. It won only six seats in 2002 and again in 2007, when it was thought the party’s moment had come. It was a false dawn.

The party would now argue that in the intervening decade conditions have changed dramatically, that green politics is no longer in the margins but part of the mainstream.

In Belgium, Denmark and Germany the Greens have pushed hard at every opportunity to get into government

Yet its national coverage remains patchy. In the local elections, it ran no candidates in seven counties and had a minimal presence in another five. On the other hand, where the party had a presence its percentage was higher, particularly in urban areas.

In the local elections, it had 20 per cent support in Dún Laoghaire-Rathdown, 15 per cent in Dublin City; 14 per cent in Fingal and 10 per cent in South Dublin.

Besides its two Dáíl seats (in Dublin Bay South and Dublin Rathdown), the party has a chance of more seats in at least 10 other constituencies, mostly in Dublin. There are opportunities for the Greens in Dún Laoghaire, Dublin South West, Dublin Central, Dublin Bay North, Dublin Fingal.

Outside the capital, Galway West and Cork South Central are also in the mix, as are Wicklow, Waterford, Kildare North and maybe even Limerick City and Clare. The party’s seat levels are likely to creep into double figures.

But winning Dáil seats is not an automatic process, and there are mitigating factors. One is that other parties have begun to appropriate Green policies and principles as their own.

Also, an economic shock that threw the economy into a deep recession could also be disastrous for the Greens. The environment is always trumped by budgetary imperatives when a country’s economic fortunes go south.

The internal debate in the party as to its stance after the next election will be informed by what has been happening in Europe. In Belgium, Denmark and Germany the Greens have pushed hard at every opportunity to get into government – to implement the core policies now, rather than later. That approach chimes very strongly with that of the leadership.

At the convention this weekend, there will be opposition to that and also calls for alliances of like-minded left-leaning parties. Even though the members ultimately decide strategy, Eamon Ryan has become the personification of the party and is associated with its success. His view carries huge sway within the party.

And as of now, his thinking is that going into government if the party has more than six Dáil seats guarantee at least two senior ministries.