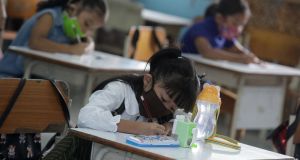 School pupils in Banda Aceh, Indonesia. How to reopen schools safely during the coronavirus pandemic has been the subject of a vigorous global debate. Photograph: Hotli Simanjuntak/EPA

Coronavirus may be more easily transmitted in school and summer camp settings than previously understood, after the emergence of new details of outbreaks in the US state of Georgia and in Israel that have underscored the risks of school reopenings.

A report by the US Centers for Disease Control and Prevention (CDC) into an outbreak at a summer camp in Georgia suggests children – even asymptomatic cases – may play an important role in community transmission of Covid-19.

The claim contradicts a number of earlier studies where the consensus appeared to be that children rarely transmit the virus between themselves or to other people.

This week 260 employees in one of Georgia’s biggest school districts were barred from entering their schools to plan for reopening because they either had the virus or had been in contact with an infected individual.

The disclosure comes after an official report of what appeared to have been a “super-spreader” event, also in Georgia, where more than 200 teenagers attending an overnight YMCA summer camp were also infected.

Although the camp, involving about 600 young people, followed sanitation rules including staff wearing masks, campers were not required to, and local health officials said “relatively large” groups of children aged between six and 19 slept in communal cabins.

According to a report by Georgia health officials and the CDC, the outbreak occurred in late June and was identified after a teenage staff member developed symptoms. After testing 344 attendees, 260 were found to be positive.

Equally troubling, according to the report, was the fact that – contrary to earlier theories about the spread of the disease in children – younger children, as well as those who spent longer at the camp, appeared more likely to be infected.

The CDC report said: “The findings demonstrate that Sars-CoV-2 spreads efficiently in a youth-centric overnight setting, resulting in high attack rates among persons in all age groups, despite efforts by camp officials to implement most recommended strategies to prevent transmission.”

The report added: “Asymptomatic infection was common and potentially contributed to undetected transmission, as has been previously reported. This investigation adds to the body of evidence demonstrating that children of all ages are susceptible to Sars-CoV-2 infection and, contrary to early reports, might play an important role in transmission.”

Amid a vigorous global debate about the reopening of schools, the Georgia events have highlighted how little is known about the spread of Covid in younger age groups, with much of the focus in recent months on older and more vulnerable populations.

Part of the issue, as the Harvard epidemiologist William Hanage explained last month, is that many countries closed schools early in the pandemic, leaving little opportunity to study if and how the virus spread among children, and studies that had been made of children and transmission were sometimes problematic.

“Now, because children are much less likely to have severe disease or even noticeable symptoms at all, that means that an adult is more likely to be identified as the index case. And then when you go around and you sample the kids, you find the kid and you assume that the adult must have transmitted to the kid.

“The other thing about it is that the closure of schools and other interaction, other actions that people have taken as part of social distancing, limit the opportunity of children to make contacts along which the virus could transmit. So, we’re not seeing the types of interactions that we might expect if schools are opened.”

Prof Hanage summarised the conundrum to the Guardian: “If community transmission is low, the costs to kids of keeping schools closed are much greater than keeping them open.

“However if community transmission is high or increasing, opening schools can only add to it. It’s not clear by how much . . . After all, the fact that kids have much less severe disease means that in the event of a large transmission event in an elementary school you are much more likely to detect the adults than the kids.”

The recent events in Georgia also appear to mirror the experience of Israel, where a rapid and full reopening of schools has contributed to a resurgence of the virus there.

Israel was seen as a success story at the start of the pandemic after imposing a strict lockdown in March that curbed the spread of coronavirus. However, measures were gradually eased, with the government keen to limit the financial fallout and get parents back to work, and children returned to school in May.

But by the end of that month coronavirus was spreading through classrooms and authorities shut about 100 schools before the summer break, ordering thousands of pupils and teachers into quarantine.

The hardest-hit school was Jerusalem’s Gymnasium Rehavia, where 153 students and 25 staff tested positive, with some criticising the handling of the outbreak.

“At the entrance to the school, everyone just collected and entered as we were all close to each other,” said one pupil, Amit Sason, quoted by the Jerusalem Post.

The need for greater social distancing at schools and workplaces was highlighted last month by Israel’s public health chief, Siegal Sadetzki, when she quit in protest at the government’s handling of the crisis.

And while the government has imposed some new measures, such as closing malls at weekends and limiting attendance at places of worship, summer schools have stayed open.

In Jerusalem, Zhuravel Segal’s children, aged three and five, have been among those attending summer programmes as they wait for the school year to start in September.

“I really want them to open and I want things to be as normal as possible. I think the danger to our mental health [of staying at home] is more detrimental than the virus,” said Ms Segal, who works as a fundraiser.

But after being encouraged by the government’s initial response to coronavirus, she said officials had “lost the way”.

“The way this crisis has been handled over the past two months has been my biggest disappointment in Israeli public life,” she said. – Guardian