SF may not be able to bring all militants on peaceful course, diplomat reportedly said in 1997 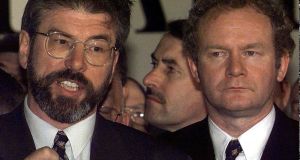 A senior Irish diplomat told British officials that Sinn Féin’s leadership might not be able to bring all republican militants together with party leaders in their peaceful political strategy, three months after the restoration of the IRA ceasefire.

According to a confidential note, one of the latest tranche of official UK files to be declassified, of a conversation at a dinner in November 1997, David Donoghue – the Irish head of the Anglo-Irish Secretariat in Belfast – said the Irish government had repeatedly told Sinn Féin “they had to accept the principle of consent (it was not a question of ‘if’ but ‘when’) but felt that although the Sinn Féin leadership might not recommend the eventual package to be put to the electorate, they would eventually sign up to it, taking the view that it represented a transitional arrangement”.

The note says “the Irish side recognised that the present Sinn Féin leadership had difficulties with militants in their organisation and might not eventually bring all of them with them”.

Earlier in November 1997 a number of Sinn Féin members in the Dundalk area had resigned from the party in protest at the leadership’s decision to accept the Mitchell principles on peace and democracy. About the same time the IRA’s then quartermaster general Michael McKevitt was reported to have joined with a number of other dissident republicans in forming the breakaway Real IRA – the organisation responsible for the 1998 Omagh bombing.

Mr Donoghue was “not entirely confident that the planned referendums North and South would give Sinn Féin honourable grounds to acquiesce in a settlement they could not endorse. This was because two separate referenda, even on the same day, might be held to violate the theological requirement for Ireland to speak as one.”

During the dinner at the Anglo-Irish Secretariat at Maryfield, the Department of Foreign Affairs’s base in Northern Ireland, officials also discussed the relationship between the Irish government and the Ulster Unionists, which Mr Donoghue felt “was the most important at the present time”. Mr Donoghue reported that “notwithstanding a difficult first meeting [Ulster Unionist leader] David Trimble had with Mr [David] Andrews [the Fianna Fáil minister for foreign affairs] their subsequent meeting and that between Mr Trimble and the taoiseach in London had been good, and established a more ‘settled relationship’”.

The Irish diplomat was felt by Northern Ireland officials to be “surprisingly bullish about political prospects generally, and the Irish-UUP relationship in particular”, according to the note. However, Mr Donoghue had one caveat, namely that Stormont’s “Castle Buildings with close press proximity was not . . . conducive to achieving a political settlement”.