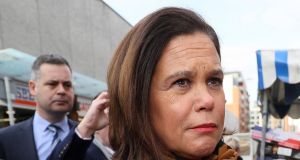 Mary Lou McDonald has said Sinn Féin’s decision to seek a review of the Special Criminal Court was made in 2017 following “party discussions”.

The Sinn Féin leader has been pressed during the election campaign on the party’s previous opposition to the court and whether she supports its abolition. She has said she wants to see a review of the court.

When asked who set the policy and when, she did not name a specific person but said that “since 2017 we have been looking for this review and it’s recorded on the Dáil record.

“Our objective here is to ensure that we have safe communities. We support the court system, the judicial system, the apparatus of the State but we’re simply saying what we have at the moment isn’t delivering the level of safety and security that our communities need.”

When asked again who set the party’s policy, and when, she said: “It’s on the record of the Dáil.”

She said it was not set at an ard fheis but instead was a “development” of party policy.

“It was party discussions and it was led by our justice spokesperson at the time . . . anyway, it’s recorded on the record of the Dáil.”

She said that if the outcome of the review recommended that the court should continue operating, she would support that.

“You set up the review, the judge reports back and of course we accept and follow the advice and judgment. We are not going to try and shy away from that.”

He said this is because “the cabal in West Belfast will not allow her to come out in favour of the Special Criminal Court because they know it undermines their revisionist view of what happened in this country for 30 or 40 years during the Troubles.

“We need to recognise that if we don’t have the special criminal record in respect of prosecution of gangland and criminality what is going to happen is that jurors are going to be intimidated.”

On the penultimate day of campaigning, Ms McDonald held a canvass on Moore Street in Dublin.

She claimed the establishment was counting on younger people and people from working-class communities and lower-income people staying at home and not voting on Saturday.

She also said she believes she can be taoiseach.

“It is obviously the first major campaign that I’ve led as party leader here in this jurisdiction.

“It’s been great craic. I’ve enjoyed the conversations with people across the State, it’s the part of my role as a political person that I enjoy most. Of course it has been busy, long days and so on. But I’m going to withhold judgment on how I view this campaign until we have the results.”