Election 2020: Students look for alternatives to FF and FG 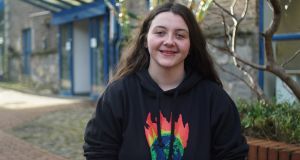 Bláithín Pringle is a final year student in NCAD and will be voting for Independents or Sinn Féin in the election. Photograph: Enda O’Dowd

In common with many of her fellow students at Dublin’s National College of Art and Design (NCAD), she’s still making up her mind about how to vote in Saturday’s election.

She’ll probably vote for “all Independents, and possibly Sinn Féin. I’m of the opinion to give someone else a chance. We’ve fallen between Fianna Fáil and Fine Gael for the last while, and it’s not really done the country much good.”

She thinks Sinn Féin should be given a chance by the electorate. “And if they don’t do it right, we can move them on next time.”

At a picnic table nearby, a group of six graphic design students are discussing Tuesday night’s televised leaders’ debate. All six are registered to vote, and all intend to exercise it.

When they do, it won’t be for either of two parties which have dominated Irish governments since the foundation of the State, they say.

“I’ve decided not to vote for Fianna Fáil and Fine Gael because I’m kind of sick of the endless circle of one comes in, messes up, and then the other one comes in, and does a worse job,” says Kathleen Chambers, who plans to give her first preference to the Social Democrats’ Gary Gannon, in her Dublin Central constituency.

Among the students who speak to The Irish Times, there is a sense that this election is something more than an opportunity to give their verdict on the current Government. It is also a chance to redraw the entire political system they inherited from their parents. The one constant in the views they express is their desire to shake things up.

For her friend Mae Nicolaou, it will be “a decision of who I don’t like the least”. Her ballot paper will probably include some combination of Labour, Green and People Before Profit candidates.

Every student we meet says they intend to vote for parties of the left – the only debate, it seems, is over which party best represents that perspective. “A lot of the argument that people have is like, give Sinn Féin your number one cause it’s a big party that’s not Fine Gael or Fianna Fáil. But I think it’s so important to give the working class parties a voice in the Dáil, with all these bankers and doctors,” says Orla King, who will be voting for Solidarity-People Before Profit.

“Students here are very much focused on a left government, regardless of who that is,” says NCAD Students’ Union president, Caelainn Kerrigan. “They want change. Even some of them who would have been too young to vote in the Repeal the Eighth referendum see what they can do now, and know that it’s up to them to create change.”

Sinn Féin is a popular second preference choice among the students, who are largely untroubled by lingering questions over its legacy of association with republican violence. With Gerry Adams gone, Chambers says, “we’re seeing the other side of the coin with Mary Lou [McDonald]. She has definitely changed the face of it . . . I wouldn’t associate Sinn Féin with the IRA or the Troubles as much as I would have when Gerry Adams was their leader.”

King chimes in that “all parties have blood on their hands. Fine Gael used to be Blueshirts. You can’t forget their history. If you’re going to bring up the Troubles, acknowledge Fine Gael’s past as well.”

In the television debate on Tuesday night, McDonald stumbled over questions about the Special Criminal Court and remarks that had been made by Sinn Féin’s Finance Minister in the North, Conor Murphy in the aftermath of the murder of Paul Quinn in 2007. But Kerrigan believes these issues won’t deter younger voters, who are not all familiar with the issues at stake. “The Special Criminal Court is where they might start to lose interest, when it gets into the really nitty gritty legal reform,” she says.

The last government that completely changed Irish politics was held on a Saturday. So you know, here’s hoping

For Chambers, however, there are other reasons not to want Sinn Féin in government. “I love Sinn Féin where they are. I love them being in Opposition. I really get enjoyment out of watching Mary Lou giving them all hell and bringing the actual problems of working class people into the Dáil.

“It’s not that Mary Lou shouldn’t be taoiseach, but I think Sinn Féin will lose respect” if it goes into government, she predicts.

NCAD entertainments officer Sean McKeon is one student who won’t be part of the much-anticipated Sinn Féin surge. “I would not vote for Sinn Féin just because I feel like it’s a bit too hard-core,” he says. “I’d sort of compare them to Labour in the UK, [making] promises that aren’t really going to come true in the real world.”

As an example, he points to Sinn Féin’s housing policy and its promise to build “100,000 units in five years”. He works part-time in construction, and says everyone he speaks to on building sites believes “that’s so unrealistic”.

He also worries about its ability to represent Ireland’s interests abroad. “I don’t think they’d be able to work in a real world context.”

He plans to vote for Independents, though he’s not very enthused about the prospect. “Irish politics is like a small town election,” he sighs.

This is the “Instagram election”, he says, in which undecided students are turning to social media and even online political quizzes to help make up their minds. “Young people are sort of going towards whoever they see on Instagram, or wherever their mates are telling them to vote for.”

He believes it’s better to “vote for yourself, rather than doing it because your friends are doing it, or because you saw a meme about Leo Varadkar on Instagram.”

Kerrigan, however, argues social media has served a valuable purpose in helping students to inform themselves. “Students here are really, really engaged, and I think a lot of that is down to social media. There was a big trend with a political quiz online that a lot of students were doing and which was great for them to be able to make up their minds on who they were voting for.”

Shane Carty is one of the students who tried a US-based online political quiz to help him make up his mind. “I got attached to the Social Democrats and Sinn Féin.” He’s still weighing up how to vote, he says.