Labour leader describes FF, FG, SF manifestos as ‘con job trying to be all things to all people’ 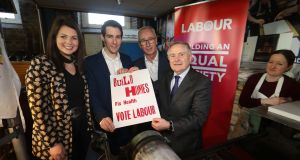 Left leaning parties should develop a broad policy platform to be in a strong position for talks on government formation, Labour leader Brendan Howlin has said.

He also claimed that the manifestos of Fianna Fáil, Fine Gael and Sinn Féin were a “con job, trying to be all things to all people”.

Mr Howlin called for a joint policy platform that covered the “broader view of left parties”.

He did not see how the numbers could add up to form an alternative government that excluded Fianna Fáil and Fine Gael “without everybody else being involved in it and that would be a very, very difficult amalgam to put together”.

He said that by thinking strategically beyond the election, like-minded parties could “give a signal that we actually can have real change”.

“We shouldn’t leave ourselves individually available to be picked-off and if we had a critical mass of seats between the Labour Party, the Greens, Social Democrats and like-minded Independents, I think we would be in a very strong position to talk to anybody else,” he said.

Speaking at a Labour campaign event in the National Print Museum in Dublin, Mr Howlin said Fianna Fáil and Fine Gael were both saying “if you want change vote for the same”.

The Wexford TD said Labour “will not con the voters that you can be all things to all people” and that the party’s central message was that it would stop the waste of public money, build homes and fix the health service.

He said that in Tuesday night’s TV debate the Fianna Fáil, Fine Gael and Sinn Féin leaders had promised big spending. However, he warned that “you can’t spend money twice”.

He criticised Sinn Féin over its manifesto and policies and said “some people have picked Sinn Féin basically for the reason that they haven’t any experience in government in the Republic but that is not a very good reason”.

Mr Howlin said Labour would freeze rents for three years and bring in much stronger rent controls. “Our unique position on health is to invest €1 billion of new money every year into the health services.”

He said he had never previously at any other election seen the electorate “in flux the way it is now” and he believed a lot of people would decide on the last day.