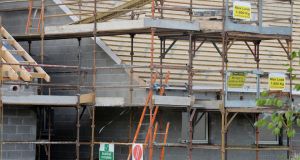 An Irish Times investigation, which began in December 2018, has uncovered building defects in 33 developments across Ireland. File Photograph: Alan Betson

Sinn Féin has tabled a Bill in the Dáil which seeks to establish a redress board for people affected by Celtic Tiger building defects.

The Bill aims to help homeowners affected by building defects by providing advice, facilitating mediation, adjudicating on cases, conducting risk assessments and making recommendations to the Minister for Housing on the setting up of a redress fund.

An Irish Times investigation, which began in December 2018, has uncovered building defects in 33 developments across Ireland comprising almost 2,000 apartments .

The most recent cases saw homeowners in Blackrock having to pay €25,000 to rectify rotting window frames and balconies, which were causing water to come into a number of residents’ homes.

Another homeowner in Co Clare was left with a bill of €62,000 to make his home habitable after an engineer’s report found the severity of mould present posed a significant risk to human health.

Introducing the Private Members Bill to the Dáil on Tuesday, Sinn Féin’s housing spokesman Eoin Ó Broin said it was “no longer possible for the Government to sit on its hands and ignore the plight of those with latent defects in their homes”.

He told the Dáil that for the people affected by latent defects, their home is “probably the single biggest investment in their lifetime”.

For the State to say it is a matter for the homeowner and developer “is no longer credible”, he said.

“I am introducing this Bill in a genuine attempt to encourage the Government to put in place a latent defects redress scheme, as outlined in the report Safe as Houses,” Mr Ó Broin said.

In 2016 an Oireachtas housing committee report entitled Safe as Houses recommended the establishment of a redress scheme to assist homeowners whose houses were built prior to the 2014 building regulations. It suggested a number of funding mechanisms, including an industry levy and a tax rebate scheme.

However, responding to questions from Mr Ó Broin in the Dáil in September, Minister of State for Housing Damien English ruled out the establishment of a redress scheme, insisting the State does not have responsibility for defects found in properties after builders sell them.

Speaking in September, Mr English acknowledged that it was a difficult situation but said Mr Ó Broin’s proposal of a redress scheme “involves an unquantifiable amount of potential exposure for taxpayers. It is not the responsibility of the State to do this.”

Speaking at the introduction of this Bill on Tuesday, Mr Ó Broin said: “It is simply not the case that either this Bill or the report is asking the State to take on a carte blanche liability. We are asking for information, mediation and adjudication in order that in the first instance, the developer is forced to pay.

“Since this is a Private Members’ Bill, I cannot propose the introduction of a fund to cover the cost of remediation where the builder or developer is still not trading. What the Bill empowers the Minister to do, however, is commission a report that would allow him to consider options for the provision of such a fund, if it were in his interest.”

The Bill passed the first stage on Tuesday and will now enter into Private Members time.