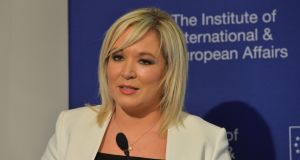 Expected clarity on Brexit in the coming weeks could help with efforts to restore the Stormont institutions, Sinn Féin’s leader in the North has said.

Michelle O’Neill also said a British general election and the publication of the much anticipated report into the Renewable Heat Initiative (RHI) may also be need to be dealt with in advance of any restoration of powersharing in Northern Ireland.

Speaking in Dublin, however, Ms O’Neill said this was not the view of Sinn Féin, which she said stood ready to re-engage in getting the Northern Ireland executive and assembly back up and running.

The assembly sat for the first time in 1,000 days on Monday to consider a DUP Private Members’ Bill that would have put any change in the North’s abortion laws in the hands of MLAs rather than Westminster.

Abortion was decriminalised from Tuesday in Northern Ireland, despite the last ditch attempt by unionists to override Westminster legislation.

The DUP motion failed because it could not proceed without a new speaker being elected. This would have required a cross-community vote but Sinn Féin boycotted the sitting and the SDLP walked out.

‘Running out of road’

After addressing the Institute of International and European Affairs (IIEA) in Dublin on Tuesday, Ms O’Neill told reporters that what happened in Stormont this week was a “farce”.

“It was a political stunt on behalf of the DUP to continue to deny citizens their rights: both the LGBT community and women,” the Mid Ulster MLA said.

“It failed. Far be it from me as an Irish republican to welcome the British government legislating for anything in the North but the reality is they are a co-guarantor of the Good Friday Agreement with responsibility for rights.”

She also said it was significant that Julian Smith, the British secretary of state for Northern Ireland, on Monday extended the period during which fresh Stormont elections can be avoided.

“But that period only runs to the 13th of January. We are very quickly running out of road in terms of being able to put the institutions back together.”

The institutions collapsed in January 2017 over the RHI controversy and Ms O’Neill said it would not be “sustainable” to have Stormont inactive for three years.

The passage of the revised Brexit deal – opposed by the DUP, who have a confidence and supply agreement with the Conservative government in Westminster – may help with talks, she indicated.

“Perhaps Brexit clarity will allow us the opportunity to be able to do that,” she said.

“We are potentially – potentially – going to have some Brexit clarity. RHI is due to report we believe very shortly and we could actually be facing a British general election.

“So that begs the question of whether or not political unionism are up for doing a deal in this space. Perhaps the window is after that but that is not the Sinn Féin view. We stand ready today.”