Saoirse McHugh: ‘I don’t care who did what in the Civil War’ 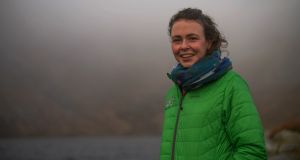 Saoirse McHugh, who will stand for the Green Party in Mayo in the next general election. Photograph: John Nikolai

Five months ago, Saoirse McHugh was the story of the European Parliament elections for 36 hours when it looked for a time like she could win a seat for the Green Party in the Midlands-North-West constituency. In the end, she did not get enough transfers to push her over the line, but she had secured 51,000 first-preference votes. Most importantly, it left her with a political base.

Now, the Achill-Island-based Green, who won a public profile during the European campaign on the back of a number of clashes with fellow candidate Peter Casey during an RTÉ Prime Time election debate, is to stand in Mayo in the next general election.

Part of a new, post-coalition generation now rising in the party, McHugh (29) believes that a significant divide has emerged between those in Ireland who grew up before and after the recession. The Greens were in coalition with Fianna Fáil between 2007 and 2011, when the crash hit.

“It has been so long since I’ve seen a politician and thought that they speak for me. I feel that there is now a real generational divide in how Irish people are looking at the world,” she said.

“Young people in Ireland now see that the promises of the 1990s are never going to come true. We can’t all go shopping in New York.

“Growing up with climate breakdown, the rise of the far-right across the world and even things like Brexit can affect your world view. There are two different world views in Ireland right now, at least two.”

McHugh has been involved in some of the more radical proposals to emerge from the Green Party in recent times, including spearheading an unsuccessful bid calling for the Greens to adopt an official “anti-capitalist stance” at the party conference in July. She believes that it is now time for a new type of politician to emerge in Ireland.

“I think for a long time we have left politics to a certain type of person. It’s not necessarily the most qualified or the most able; oftentimes it’s a person with a certain kind of bluster,” she said.

“We think to ourselves that we could never be a politician, but I think it would be great if a lot more people started standing for office. We need far higher representation of women, people with disabilities, people of colour, members of the Travelling community. We do have a non-diverse representation in politics and that is going to lead to certain kinds of policy.

With the party still recovering from the coalition government with Fianna Fáil, McHugh says she would need several clear commitments before she could support a coalition between the Green Party and any of the main political parties.

“I would need to see a programme for government that is so transformative and dealt not just with climate issues but with issues of equity and the priorities that we have as a society. Why did executives of multinational companies get an €18 million tax break in this budget, but we all got a carbon tax?” she said.

“There would need to be a fundamental shift away from prioritising business profits and towards protecting people for me personally to consider a coalition. I would not go into a coalition because of who a party is – I don’t care who did what in the Civil War – I would only go into a coalition with a party who I felt was good.

“If you were to extrapolate our leading party’s future position from their positions over the past 100 years, then I would not go into coalition with any of them.”

Standing in a rural constituency, McHugh believes the interests of struggling farmers and environmentalists can both be addressed by locally targeted policy introduced at the national level.

“I think I can bring an honest, clear and realistic take on climate action, because it’s just not been talked about properly. It’s being framed as a fad issue that will eventually go away. If we buy enough electric cars we can ignore it and hope it blows over,” she said.

“I think a lot of the answers to rural decline, the problems in farming and climate breakdown have the same answers.

“It will be rural Ireland in the end that will suffer the most from climate breakdown. It’s here where the sea comes in, it’s here that’s flooded, where animals die and where roads are washed away.

“Convincing rural people [to tackle climate change] won’t be the problem. The challenge will be coming up with regionally designed agricultural programmes which can respond to the challenges in farming while also dealing with climate issues.

Analysis: Noticeable that the party did not charge into Leaders’ Questions with usual budgetary critique