Anti-Brexit protests taking place in Co Louth, outside Stormont and along the Border 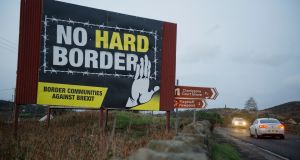 A poster near the Border in Newry, Co Down. Photograph: EPA/Aidan Crawley

The United Kingdom will “break free from the EU prison” at 11pm on Friday night, the DUP’s Brexit spokesman, Sammy Wilson, has said.

However, he warned that “as we leave the dank dungeon which has bound our economy, stunted our growth and restricted our economic freedom”, the UK government must “not allow the EU to continue its control through conditions attached in the negotiations which now have to follow”.

Mr Wilson was among a number of political and business leaders in Northern Ireland to issue statements on Friday marking the UK’s departure from the UK.

It was “especially important for Northern Ireland”, Mr Wilson said, “that the concessions given to the EU in the Withdrawal Agreement do not leave us in the EU prison yard or acting as a part of the United Kingdom released only under licence”.

Referring to British prime minister Boris Johnson, Mr Wilson said: “Now is the time to flex his muscles and use the majority which the people of the UK have given him to properly break away from the malign influence of the European Union.

“Today we can celebrate the first step in achieving what people voted for in the referendum to make Britain a free democracy again.”

Pro-Brexit campaigners are to gather at the gates of Northern Ireland’s Parliament Buildings at Stormont at 10.30pm on Friday night where they will wave flags to celebrate the UK’s departure from the EU.

Anti-Brexit protests organised by the Border Communities Against Brexit group and Sinn Féin have been taking place in Co Louth and outside Stormont. Protestors will also gather at six locations along the Border on Friday night.

Speaking at a protest in Co Louth on Friday morning, Sinn Féin leader Mary Lou McDonald said: “Today is a very sad day, people in the North did not consent to Brexit. This is not something that people on the island of Ireland want, bar a small minority.”

Brexit, she said, “ is a game-changer, it’s not a one-off event, it completely recasts and reshapes the political and economic conversation across the island, between the island of Ireland and Britain, and right across the continent.

“So this isn’t an end point, this is very much a beginning.”

Last week, the North’s five main parties voted to withhold legislative consent from Northern Ireland for the UK government’s Brexit withdrawal deal. The DUP is pro-Leave but is opposed to the deal because it creates a border in the Irish Sea.

The DUP’s Lagan Valley MP, Jeffrey Donaldson, told BBC Radio Ulster that the party representatives “recognise there are many others in the UK who didn’t support Brexit”.

“I’ll be welcoming Brexit”, he said, “but I recognise that there are divided opinions and we must now look to the future and work together and heal our nation. Let’s focus on the opportunities that are out there,” he said.

The Ulster Unionist Party (UUP) leader Steve Aiken said an “economic and regulatory border in the Irish Sea is nothing to celebrate for Unionists in Northern Ireland, no matter what side of the EU referendum debate you were on.

“Even the most ardent of Brexiteers in Northern Ireland have real and genuine concerns about the future because of Boris Johnson’s woeful Brexit deal.”

He said unionism “can’t afford any more strategic mistakes”, and “instead we need to focus on how we go about curbing the worst excesses of Boris Johnson’s Withdrawal Agreement to protect our trading links with our biggest market in Great Britain, grow our economy in the future and strengthen the Union”.

Brexit, he said, was “an act of constitutional violence inflicted on the people of Northern Ireland and Scotland by an English electorate.

“We have not and will not consent to being dragged out of the European Union.

“The fight to defend the interests of people in the North is not over. The first phase of Brexit will finish at 11pm tonight but the battle to secure trading arrangements which provide businesses here with ambidextrous market access begins in earnest,” he said.

“The Government is right in that Brexit signals a new chapter in our history - but it signals only discord and division across these islands.

“As we enter the transition period, full responsibility sits with the PM to deliver his repeated pledges of prosperity and trade deals come the end of this year.

“The Northern Ireland economy and peace process are depending on it,” she said.

John McGrane, director-general of the British Irish Chamber of Commerce, said it was “with a heavy heart that we witness the end of the United Kingdom’s membership of the European Union tonight”.

However he said the “most difficult part” of the negotiations was yet to begin, and the Chamber hoped that “a more practical approach will emerge from both sides that will take account of legitimate business interests and concerns.

“In the meantime, businesses must continue to prepare to ensure they are able to continue to do business and trade in any scenario that might emerge over the coming eleven months,” he said.

The British Medical Association (BMA) in Northern Ireland said it was concerned there were still outstanding issues which still needed to be resolved.

“Freedom of movement has enabled doctors and other healthcare staff to travel, work and teach across Europe, letting those from the EU to both contribute to and learn from the NHS, while UK-trained clinicians have been able to share their skills in other European nations,” said the BMA’s NI Council Chair Dr Tom Black. “We want to see that continue particularly across the island of Ireland.

“With just 11 months to finish negotiations on our future relationship with the EU, there are still issues to be resolved: current cross border health services must be able to continue and indeed expand; the practicalities around the transport of medicines over the border still needs to be resolved and replacement funding for EU funded services will need to be found.

“We also need to ensure the supply of vital medicines are not disrupted, protecting collaborative relationships with our neighbours on medical research, and introducing a flexible immigration system,” he said.

The Northern Ireland director of the Confederation of British Industry (CBI) NI, Angela McGowan, said that there was now time to “shape a new relationship” between the UK and the EU.

“It’s time to come together to build a new relationship with Europe. This can reflect our shared values and mutual interest and support bold global trade ambitions.”

Aodhán Connolly, Director of the Northern Ireland Retail Consortium, said that with “a mere eleven months to do a Free Trade Agreement with the EU…a pragmatic approach is needed by all parties to ensure the NI protocol is workable from next January, and well as the inclusion of sector-specific implementation periods to allow businesses to apply the many changes that are negotiated.”

Roger Pollen, the Head of External Affairs with the Federation of Small Businesses, said it was “crucial that all parties to the Agreement strive to minimise friction and bureaucracy, deliver on the promise of “unfettered access” and also maintain smooth trade flows throughout the island of Ireland.

“There is an opportunity for Northern Ireland to position itself as one of the best locations from which to do business, with ready access to both the EU and UK markets. “We must not squander that opportunity.

“Ireland will do well to have a prosperous neighbour to the North, able to contribute to shared infrastructure and services that will benefit all on the island.

“Managing Brexit with that objective in mind will stand all of us in good stead,” he said.