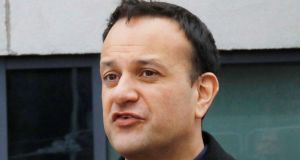 Taoiseach Leo Varadkar has sought to assuage the concerns of Fine Gael councillors about entering government with the Greens, insisting rural Ireland has nothing to fear from Eamon Ryan’s party.

Mr Varadkar hosted a call with the Fine Gael leaders on local authorities around the country earlier this week. Fianna Fáil, Fine Gael and the Greens are continuing negotiations on a potential programme for government.

Those on the call said that the majority of Fine Gael councillors who spoke expressed concerns about the Greens, even more than any concerns they had about Fianna Fáil.

“There was a lot of opposition,” said one source.

Councillors based in Dublin were said to be more positive towards an alliance with the Greens, such as Mary Seery-Kearney of South Dublin County Council, who spoke in favour of the potential coalition.

Other Dublin councillors, such as Ray McAdam of Dublin City Council, are known to have serious concerns about Fine Gael entering government with Fianna Fáil and the Greens. Among those in rural Ireland who was opposed was Bobby O’Connell in Kerry.

Those on the call said they were left with the impression that Mr Varadkar is intent on entering government, although he insisted he would not recommend that a programme for government be put to a Fine Gael special delegate conference if it did not reflect party values. He also said there were difficult issues outstanding in the talks.

He emphasised the importance of road projects -– a “red line issue”– set out in the Project Ireland 2040 plan, as well as support for rural Ireland and middle Ireland.

Green Party figures had previously said they wanted to reallocate road funding towards cycling and walking infrastructure but the government talks were this week told that contracts had already been signed for a significant number of these projects.

One councillor said of Mr Varadkar’s contribution: “He said ‘rural Ireland has nothing to fear from them’. He did a better job of defending the Greens than Eamon Ryan does.”

The Taoiseach also said Fine Gael would need a ministerial team that was balanced along gender and geographic lines, if it re-entered government.

He said Fine Gael should not be afraid of a general election if the efforts to form a government failed, but said such a development would not be right for the country.

One councillor, Jarlath Munnelly of Mayo, asked if Fine Gael could not pick an issue on which to walk out of government talks but Mr Varadkar said the party would be “found out” if it did that.

He said people interpreted recent contingency planning for an election or referendums during a pandemic as Fine Gael plotting for an election. Mr Varadkar also said Fine Gael, Fianna Fáil and the Greens would co-ordinate their ballots of party members on any deal to ensure the results were announced at the same time.

Meanwhile, members of the Fianna Fáil Ard Chomhairle have been informed of a special motion to be tabled at a meeting next week to allow members hold a postal ballot on entering government.

Party rules stipulate that a special ardfheis must be held to ratify any government deal on a one-member, one-vote basis. But the rules have had to be changed due to the Coronavirus crisis to allow for a postal ballot.

There are an estimated 15,000 members of Fianna Fáil. Each member will be given an envelope with a special barcode printed on it in which to return their ballot.