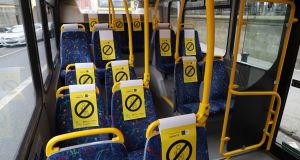 Dublin Bus chief executive Ray Coyne has warned that the company’s fleet will not be able to operate if two-metre social distancing has to be observed.

Mr Coyne said the two-metre rule would mean buses could only carry 30 per cent of previous numbers.

A double-decker bus can hold 90 people if all seats are taken and customers are standing.

Under the two-metre rule, just 17 people are able to use a double-decker; that capacity almost doubles to 31 people if minimum social distancing is reduced to one metre.

He warned that the economy will not be able to return to normal until public transport is functioning properly.

Mr Coyne told the Currency’s Tom Lyons: “There is no single solution but we are probably going to have to move down to one metre, increased capacity, and introduce flexible working hours.”

“Some people will have to work from home, some days. There is a whole ecosystem to get the economy back and public transport will be front and centre in doing that.”

Employers may have to introduce flexible working hours if staff are to be able to avail of limited public transport capacity, he suggested.

He pointed out that other cities had moved to a graduated approach to 80 per cent occupancy levels.

On an average day Dublin Bus caters for 440,000 passenger journeys. That dropped off to 50,000 people a day during the lockdown and has increased to just under 100,000 people since some restrictions were lifted.

He said the company will need a subvention “north of €200 million” to compensate for its losses this year as a result of the Covid-19 pandemic. Income has dropped by 90 per cent.

“From the start of Covid-19 we started to reduce our service levels to reflect the new reality,” he told the Currency.

“We dropped it to 82 per cent. At the same time, we brought in a number of cost efficiency measures from week one.”

Mr Coyne revealed that none of the Dublin Bus drivers were infected by Covid-19 though 200 staff did have to self-isolate for a variety of reasons. That figure has since been reduced to 50 people.

The company installed perspex screen dividers on tables within its city centre canteen.

Its drivers are in a cab and do not have interaction with passengers, he pointed out.

“They are in a cab that is effectively enclosed. Our employees are in a safe environment. Cab areas are cleaned a minimum of twice a day.”