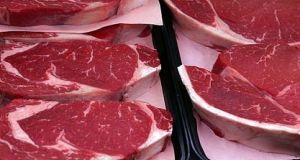 As an essential industry producing food, meat plants were not closed during the pandemic. Photograph: Getty Images

Some 800 workplace inspections, including in meat processing plants, have been carried out by the Health and Safety Authority (HSA) since the State began its first phase of reopening the country on May 18th .

There had been a “high level of compliance” as part of the return-to-work safety protocol, and employers were taking a “responsible and proactive approach” to health and safety measures during the pandemic, the HSA said on Thursday, based on initial analysis.

However, the authority had received seven complaints regarding four different meat processing plants up to May 20th, and was following up on the issues raised.

It said it was carrying out “proactive inspections” of other meat processing plants, and that the Department of Agriculture was also checking conditions in plants.

Some 103 cases of Covid-19 were reported on meat processing plants as of Tuesday, bringing to 925 the total number of cases in the sector.

As a member of the National Outbreak Control Team, the authority is “working to address the issue of outbreaks in meat processing plants, and has input from professionals in public health, environmental health, animal health and ourselves in relation to occupational health and safety”, a HSA spokesman told The Irish Times.

He said the national and local outbreak control teams have been established to recommend steps and measures to ensure current and future outbreaks could be managed and brought under control as quickly as possible.

“The authority has no role in carrying out or arranging any diagnostic tests or medical examinations relating to the personal health of individuals in any workplace. Our role relates only to occupational health and safety in the workplace.”

Minister for Agriculture Michael Creed said last week that between 55 per cent and 60 per cent of staff in meat processing plants had returned to work. He said he did not agree mistakes had been made in the sector, and that it was an evolving situation, adding that outbreak control teams had the authority to close down plants if required.

Employees at meat plants work in prolonged close proximity to other workers, increasing the risk of transmitting the virus.

The rigid production lines, often involving, for example, a conveyor belt of pig carcasses on hooks passing along a factory’s “kill line”, mean that the nature of the work is at close quarters, involving repeated activity by hundreds of staff standing shoulder to shoulder.

As an essential industry producing food, meat plants were not closed during the pandemic.

Among the precautions taken in meat plants to curb the spread of the virus are reduced production by processing fewer animals, staggered working shifts and staff departures and arrivals, and reconfigured production lines, including installing partitions where possible to ensure workers maintain two-metre physical distancing.

The HSA said employers, workers and members of the public could access advice, guidance, templates and checklists relating to health and safety during the pandemic from the authority’s website.