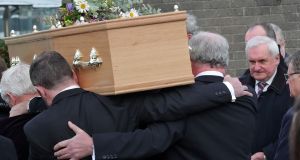 Former taoiseach, Bertie Ahern looks on as the remains of his former advisor Paddy Duffy are carried into Our Lady Queen of Heaven Church, Dublin Airport. Photograph: Collins

The former taoiseach Bertie Ahern was among the large number of people from Irish public life that turned out for the funeral mass of Paddy Duffy in Our Lady of Heaven Church in Dublin Airport on Wednesday.

The Cathaoirleach of Seanad Éireann, Senator Denis O’Donovan, was among the large number of Fianna Fáil politicians and others in attendance for the celebration of the life of the former adviser and speechwriter to Mr Ahern.

In his eulogy, Gavin Duffy said his father was a true renaissance man who “loved being in the now”.

At the outset of his address he also said he was going to do the opposite of what his father would have done – “keep it short”.

A former member of the Christian Brothers, Mr Duffy studied philosophy in Rome before leaving the order and becoming a teacher in De La Salle School Finglas.

A close associate of Mr Ahern’s since the late 1970s, the two friends were together in Heathrow Airport on October 17th, having returned from Papua New Guinea, when Mr Duffy (75) died suddenly.

Mr Ahern was working in the Bougainville region of Papau New Guinea ahead of an independence referendum next year and Mr Duffy was travelling with him.

As well as thanking those at Heathrow who had come to his father’s aid, Gavin Duffy said Mr Ahern, who had become his father’s friend forty years earlier when they met in Finglas, had also been there at the end and had given much needed comfort to the family at a time of turmoil.

The funeral mass heard that as well as his work as a teacher, political adviser, business consultant and contributor to international trade and peace missions, Mr Duffy was also keenly interested in literature and, most recently, in photography.

“He was a man who perfected the art of not sitting still,” Gavin Duffy told those whom he thanked for gathering to celebrate his father’s “great life”.

Fr Des Doyle, who told mourners that the couple had been married in the church in 1975, said Mr Duffy was “gifted with felicitious diction”, had a great love for languages, and had known that words could be powerful.

He said that the Apostle John had been one of Jesus’ closest friends and had later written that all of reality comes from the Word, which is how he had described Christ.

Mr Duffy’s coffin was taken from the church to the sound of Pádraig Ó hEaráin singing Mo Ghile Mear. The family asked that any donations, if desired, should be paid to the Irish Heart Foundation.