Mary Lou McDonald denies it was a mistake to hold election 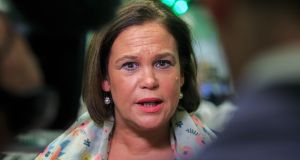 Sinn Féin leader Mary Lou McDonald has denied it was a mistake to hold a presidential election.

Speaking after Michael D Higgins was re-elected President with 822,566 votes or 56 per cent of the total poll, the highest vote ever in any of the eight presidential elections in the history of the State, Ms McDonald said it could not be argued that the head of State would hold their role for 14 years without a democratic punctuation point at seven years.

The turnout, at 43.8 per cent, is the lowest for a presidential election in this State and Ms McDonald admitted this was a disappointment.

Sinn Féin MEP Liadh Ní Riada was fourth on 6.4 per cent, with Senator Joan Freeman on 6 per cent. The third of the Dragons’ Den panellists Gavin Duffy finished last on 2 per cent.

Speaking after a difficult campaign for party candidate Ms Ní Riada, who secured 6 per cent support – less than half the vote share garnered by the late Martin McGuinness in 2011 – Ms McDonald said it was not good enough to dislike the result and say it was a mistake to hold an election.

She admitted Ms Ní Riada had not polled as well as she would have liked and that many Sinn Féin supporters did not support the party’s candidate.

Ms McDonald said it appeared voters did not view their support for a presidential candidate through party political loyalties.

She told RTÉ Radio’s This Week programme presidential elections were eccentric but there were now questions to be addressed about the level of public engagement and public prestige for the role of president.

She said if the party opted to run a candidate in seven years it would consider using the party logo on candidates’ literature and posters and getting their candidate into the race earlier.

Ms Ní Riada was the last of the six candidates to formally enter the race.

Ms McDonald also addressed the controversy over Ms Ní Riada’s take-home pay as an MEP. During an RTÉ presidential debate the Sinn Féin candidate admitted she does not live on the average industrial wage, as she had previously claimed.

Sinn Féin has traditionally maintained its elected representatives take home the average industrial wage, with the balance of their earnings used to pay party and constituency expenses.

On Sunday Ms McDonald said she was not in a position to enforce this recommendation, but added nobody joins Sinn Féin for the “mercs and the perks”.