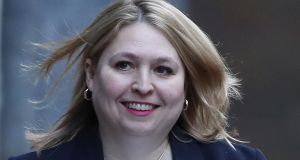 Northern Ireland Secretary Karen Bradley is “actively considering” how and when external facilitation could play a constructive role in efforts to restore political dialogue in the north. Photograph: Daniel Leal-Olivas/AFP/Getty Images

Karen Bradley is “actively considering” how and when an external mediator could play a “constructive” role in attempts to re-establish formal powersharing talks in Northern Ireland.

She told MPs in the House of Commons the idea will be raised with the various parties, with a meeting planned on Thursday in Belfast and talks with the Irish Government on Friday.

Devolved government in the north collapsed in January 2017 following a breakdown of relations between the Democrat Unionists and Sinn Féin.

The UK Parliament this week approved the latest emergency legislation to deal with the governance vacuum through the Northern Ireland (Executive Formation and Exercise of Functions) Bill, which aims to provide breathing space for politicians to resume negotiations.

It also gives civil servants greater clarity over what decisions they can take in the absence of ministers, enables UK Government ministers to make a number of stalled public appointments, and removes a standing obligation on Ms Bradley to call another snap Assembly election.

Speaking in the Commons, the Northern Ireland Secretary said: “The Bill debated last week has now been taken through both Houses. It provides for a period in which an executive can be formed at any time, allowing for time and space for talks to take place without an election having to be called.

“I continue to engage with the main parties to discuss the implementation of the Bill and next steps towards the restoration of devolution, and I’ve called a meeting for this purpose tomorrow in Belfast.

“I’m also continuing to engage with the Irish Government and on Friday the Chancellor of the Duchy of Lancaster (David Lidington) and I will be in Dublin for a meeting of the British-Irish Intergovernmental Conference.

“Additionally, I’m actively considering how and when external facilitation could play a constructive role in efforts to restore political dialogue. This will form part of my discussions with the parties.”

Independent MP Lady Hermon earlier said she would be “fascinated” to know how much it has cost to pay members of the Northern Ireland Assembly (MLAs) their full salary since the collapse.

She said: “Is it £12 million, £13 million, £14 million, and does the minister honestly believe that was money well spent when our education budget and health budget in Northern Ireland are so stretched?”

Northern Ireland minister Shailesh Vara replied: “I do not know what the precise sum is.”

He added there was an “element of goodwill” when the talks collapsed, saying this was preferred to an approach of saying “right, we’re making reductions”.

Mr Vara went on: “We had that element of goodwill, we had to introduce legislation for the cuts and we also had to have the review done.”