Repeal campaigners will not accept a No vote, says Minister

Campaigners to repeal and retain the Eighth Amendment took to the streets of Dublin as the countdown to the referendum begins. 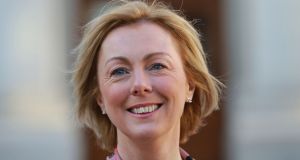 Regina Doherty: she and her Government colleagues “working very hard” to “put the facts on the table so that people can make informed decisions”. Photograph: Nick Bradshaw

Campaigners for repeal of the Eighth amendment will not accept a No vote in the forthcoming referendum, Minister for Social Protection Regina Doherty has said.

“The people who have brought us, and who have been very vocal on this issue for a number of years, they are certainly not going to accept a No,” Ms Doherty told The Irish Times in Paris, where she was attending St Patrick’s Day events. “It will probably make them redouble their efforts.”

Ms Doherty also said her previous opposition to the legalisation of abortion was “born out of ignorance”.

Ms Doherty was responding to queries about how the Government would respond if there were a No vote, and whether another referendum on the subject would be called in the future if the current proposal was defeated.

The Eighth Amendment of the Constitution, also known as article 40.3.3, recognises the equal right to life of the mother and the unborn child. A referendum on repealing the amendment will be held in May or June.

While declining to say directly if the Government would call a second poll in the event of a rejection, Ms Doherty said she envisaged the pro-choice movement would strongly push for one.

“There is a growing cohort of people that have woken up in the last number of years. And maybe a lot of people who have already been awake for a number of years on this issue but just maybe weren’t being listened to. That it isn’t acceptable,” Ms Doherty said.

“We have abortion in Ireland, ” she said. “Whether people want to admit it or not, there are 5,000 women every year leaving our shores to make personal decisions for their own health and choices in a different country. I actually don’t think it’s viable as a Government we can choose to ignore that any longer.”

Ms Doherty stressed she and her Government colleagues were “working very hard” to “put the facts on the table so that people can make informed decisions”.

“So when you actually listen to the facts I think people are compelled to be able to respond and to try and respond compassionately. It isn’t about creating a culture of anything. It’s about responding to medical needs that women are making those decisions already. We are not creating a new cohort of women. They’re there already,” Ms Doherty said.

Ms Doherty said she was previously anti-abortion but has changed her mind in recent years.

“All that has happened to me in the last number of years is that I have now become pro-women,” she said.

“I don’t agree with abortion. It’s not something that I think I could do. And that’s because of my faith, upbringing. I’m a Catholic. But that doesn’t mean that I have a right to choose and make a decision for you or for you. And that’s where I’ve changed in the last couple of years.”

She said her previous position against abortion was “born out of ignorance”.

“It was only when I informed myself that I realised just how ignorant I actually was,” she said.