Equal time will not guarantee fairness in Eighth debates 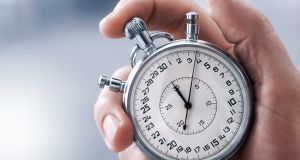 “Flawed as it is, at least the stopwatch approach is measurable. And given that broadcasters, with a few exceptions, are sometimes already failing to be fair regarding the manner of questioning, how will removing the stopwatch help?”

The Broadcasting Authority of Ireland has repeated its guidance which states that a stopwatch to measure absolutely equal time is not necessary during broadcasts on referendums.

But they also said impartiality and fairness are requirements for broadcasters at all times, not just during referendums.

It is true that the stopwatch approach does not necessarily guarantee fairness. It can lead to choppy programmes where the presenter is so concerned about counting every second that a decent discussion never ensues.

It does nothing to guarantee that one side will not be asked softball questions while the other is barely challenged.

In my experience, people who are pro-life are asked questions such as: “Would you force a woman who is pregnant through rape to carry that baby to term?” Or: “Do you think it is acceptable that a pregnant woman carrying a foetus with a fatal abnormality should be forced to travel to the UK and bring her baby home in a Jiffy bag?”

Yet I have never heard a presenter ask a pro-choice person: “Why do you think ending a human life is the best solution to an unwanted pregnancy? In what other circumstances do you endorse ending a human life as a solution?” Or: “Given that feminists are supposed to endorse radical equality, why do you want to take a provision which supports equality out of the Constitution?”

Instead, they get asked campaign-focused questions such as: “How many of your parliamentary party colleagues do you expect to see actively campaigning for the repeal of the Eighth Amendment?” Or: “If the people repeal the Eighth Amendment will there be a moral obligation for TDs to vote in favour of the proposed abortion legislation regardless of their own views?”

Flawed as it is, at least the stopwatch approach is measurable. And given that broadcasters, with a few honourable and notable exceptions, are sometimes already failing to be fair regarding the manner of questioning, how will removing the stopwatch help?

Who decides what is fair? It should be obvious. Fairness is when all parties are treated with detached, professional courtesy and allowed to make their case. But those basic courtesies are so often not observed.

This is partly because some radio and television presenters love conflict. They fear the attention span of the audience is so short that they will switch off if there is not a row. Increasingly, I hear people saying that they switch off when the row starts.

You cannot judge the value of a programme by the number of vitriolic tweets it generates but some programme-makers seem to think Twitter users are the vital demographic.

There are so many ways to stack a programme in favour of one side, for example by putting a heavy hitter up against a novice. Another way is to engage in constant, hectoring interruptions of one side which never allow someone to finish a sentence, much less a thought, while allowing the opposition to speak in paragraphs.

And that perennial favourite: insist that panel magazine programmes – programmes that deal with more three or four topics with a number of contributors – do not have to be balanced with regard to the most contentious issue of the day.

Audio or video inserts before a panel discussion often include emotive imagery that sets the frame before a panel member gets to open his or her mouth.

Some broadcasters also appear to believe that it is perfectly fine in an entertainment or a lifestyle programme constantly to run human-interest stories that favour only one side of a referendum proposal.

If a programme ventures into territory directly relevant to the referendum, the same requirements of balance and fairness should apply to entertainment programmes as apply to current affairs.

That does not mean that a pro-choice Minister has to be banned from a cookery programme. Whether a Minister with a crisis-riddled department should be doing such programmes in the first place is a different question.

Even in an era of social media, about 66 per cent of people get their news from television and 46 per cent get it from the radio. There a legal obligation on broadcasters to be fair. That should include roughly equal allocation of time, a similar style of questioning and a balanced choice of contributors.

Broadcasters often defend their commitment to fairness by claiming that they are accused of being biased by both sides. But sometimes the mere presence of an individual is enough to trigger allegations of bias.

Ideally, an independent monitoring group with agreed criteria of fairness which had the confidence of both sides and which could impose meaningful sanctions should adjudicate rapidly on claims of bias during campaigns.

Referendums are too important to be given over only to stopwatch fairness, and now it looks as if even the stopwatch will be taken away.