US vice-president Mike Pence invited Taoiseach Leo Varadkar and his partner Matthew Barrett to visit his home during a meeting at his official residence on Friday morning. Video: Suzanne Lynch 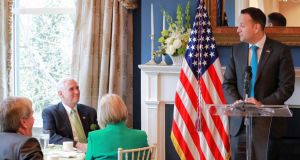 US vice-president Mike Pence invited Taoiseach Leo Varadkar and his partner Matthew Barrett to visit his home during a meeting at his official residence on Friday morning.

The meeting had been highly anticipated given Mr Pence’s previous stance on gay rights.

In a break with tradition, media were not invited to witness public remarks delivered by the two men.

Mr Pence said it was an “honour” to host the Taoiseach. “This is a great moment for us, and a very special moment.”

Noting his own family roots in Ireland, he described how his grandfather, Richard Michael Cawley, had emigrated from Sligo, landing in Ellis Island in April 1923.

“My grandfather came here, as so many have through the generations, to this country because America was a place of promise and opportunity.

“It’s a place where the American dream could happen for so many Irish immigrants and their descendants, and it happened in our family.

Mr Varadkar said he had a “really, really good” breakfast with Mr Pence and his family, noting that the vice-president had learned how to recite Humpty Dumpty in Irish when he was a child.

“I had a really nice engagement with the Pence family. I did privately manage to speak to them about equality, about my support for equal rights for women and the LGBT community here in America and also in Ireland.

“They were very well briefed. They knew about my personal story. They knew that my partner was living in Chicago and they said that both Matt and I would be very welcome to visit their home in the future. I thought that was a very nice gesture.”

Mr Varadkar will be joined by Dr Barrett when he marches in the St Patrick’s Day parade on Saturday in New York.

The city’s St Patrick’s Day Parade, now in its 257th year, has traditionally been hostile to the gay community. New York mayor Bill de Blasio boycotted the parade until 2016 when, after decades of campaigning, groups including the Lavender and Green alliances were permitted to march.

The Taoiseach also announced a new tranche of $2.5 million in funding for the Irish Arts Centre as he visited the site for the new building in New York on Friday. Construction is expected to get under way at the site, a former fire station, in the next few months, and the centre is scheduled to open in 2020.

The Government has contributed $8 million for the $60 million project, with the remainder of the money coming from private donors and the New York state and local government.

Mr Varadkar was due to visit the site of the Stonewall protests in Greenwich Village on Friday evening. a key moment in the history of the gay community. The Stonewall riots of 1969 sparked the emergence of the gay rights movement in New York.

He also met members of the Irish community at Ireland’s consulate in New York yesterday, as well as meeting former mayor Michael Bloomberg at Bloomberg headquarters in Manhattan.

The Taoiseach will attend a breakfast with mayor de Blasio on Saturday morning before attending Mass in St Patrick’s Cathedral and participating in the St Patrick’s Day Parade.