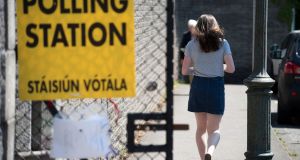 A number of voters have protested about the presence of religious symbols at polling stations amid voting in the referendum on the Eighth Amendment, but no formal complaints are understood to have been made to authorities.

A Department of Local Government spokesman said the removal of religious symbols or covering them up is a matter for local returning officers, who procure the venues for voting.

A Co Leitrim voter was angered to find a bible in front of him on the desk where he got his polling card in Co Leitrim.

“The last thing I saw before I voted was the Bible,” Declan McGovern (33) said. “I thought there was a very strong message being communicated there.”

Mr McGovern stressed he was not pushing his views on the referendum, but wanted to raise the issue of a Bible being present at a voting centre. Similar concerns had emerged during the Marriage Equality Referendum in 2015.

Describing himself as a Yes voter and a non-practising Catholic, he had voted in the village of Drumshanbo, where he grew up.

Electoral legislation makes provision for the presence of Bibles at polling stations for a person to swear on if they do not have formal identification, the department spokesman said. If such a person is offended by a Bible, they can alternatively make an affirmation.

One voter who contacted The Irish Times complained about religious symbols on display at the front entrance to the White Friar Street polling station in Dublin city centre.

The voter said abortion was a particularly “emotional and sensitive” issue, and it was inappropriate to have religious symbols on display.

Two other voters said a wooden statue of the Madonna on a wall at the polling station at Leahy Terrace in Sandymount, Dublin, should have been removed.

But officials said not a lot could be done about heavy statues high up on walls.

One south county Dublin primary school principal said the school removes all religious symbols before the school hall is handed over to the local returning officer. The principal said even a small banner from recent First Holy Communion celebrations had been taken down.

A politician received complaints from voters at the Harold’s Cross parish centre, where a “big crucifix” was hanging on the wall.

But the politician, who declined to be identified, said such symbols were to be expected when the 6,500 polling stations were mainly school halls under church patronage.

“These days people are just too easily offended,” said one veteran referendum observer.