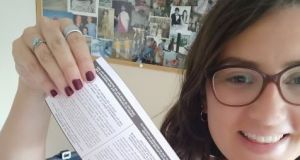 Ciara Cremin picks up her voter registration card at her home in Oughterard, Co Galway. 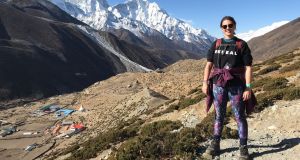 NUI Galway graduate Ciara Cremin on her trekking trip before heading for home. 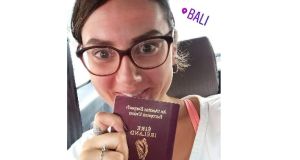 NUI Galway graduate Ciara Cremin takes a selfie with her passport ahead of her long journey home.

A Galway woman has interrupted a four-month trekking holiday in southeast Asia to cast her Yes vote in the abortion referendum.

The date of the poll had not been announced when Ciara Cremin set off almost four months ago.

The NUI Galway graduate was determined to come back and was even willing to push back her masters degree studies to pay off the almost €1,000 travel cost.

However, an appeal on the “Oh My God What A Complete Aisling” online group saw Yes supporters rally around to crowd fund her journey home.

On Thursday, she woke up in Canggu Bali. On Friday, she voted in Oughterard.

Ms Cremin, a graduate in sociology and politics, said the date of the referendum had not been announced when she set out trekking in Indonesia and Nepal.

“I had already booked flights to come home in the middle of June,” she said during a stop over in Singapore on Thursday night.

“I’ve been a big follower and supporter of the Repeal the Eighth campaign for the past couple of years and so the idea of not being home to vote was terrible, but I just didn’t have the money to pay for another flight.”

She knew she did not have the money to come back to vote but also felt she would regret it all her life if there was a No vote.

“I booked flights with my emergency credit card deciding I’d use my first few paychecks when I was home to pay for it, rather than the original plan to save for my masters in September. I then posted on social media about my plan — on the ‘Oh My God What a Complete Aisling’ page. The support started pouring in and I couldn’t believe it!”

Someone mentioned the posting on the web page Abroad for Yes, “and within two hours I’d been donated the €900 to paid for the flights”.

She said the generosity of the Irish people and their compassion astounded her.

“I’ve never crowd-funded before and it never even crossed my mind that people would care so much,” she said.

“The entire campaign to me has shone a light on the sheer beauty of humanity in Ireland and this was just another example of that.”

Shortly after 5 pm on Friday, she completed the 13,000 km journey from Indonesia, casting her vote at at her local polling station in Co Galway.