Regina Doherty to repay money she received as chief whip

Ms Doherty received an additional €15,829 but may not have been eligible for the payment 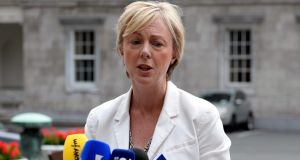 Regina Doherty received an additional €15,829 for her work as chief whip but may not have been eligible for the payment. Photograph: Cyril Byrne / THE IRISH TIMES

Minister for Social Protection Regina Doherty has insisted she will pay back any monies she received as Government chief whip if asked to do so.

Ms Doherty received an additional €15,829 for her work as chief whip but may not have been eligible for the payment under current legislation.

A report has been prepared by the Attorney General Séamus Wolfe and was forwarded to the Taoiseach and the Minister for Finance in recent days.

Speaking at the annual Collins Griffith commemoration in Glasnevin cemetery, Ms Doherty said she had not been informed of the outcome of the review.

She added: “I have no doubt in my head that I am going to be told to repay it and if I am, I will repay it. It as simple as that.”

The current legislation only allows for two super junior Ministers to be paid the allowance.

Labour leader Brendan Howlin, who first raised concerns about the payment, said the review by the Attorney General needed to be published.

Mr Howlin said it was bizarre that there was still no clarity “on a situation caused by Fine Gael creating extra jobs to satisfy backbenchers”.

“The Taoiseach has a great enthusiasm for recouping welfare overpayments. His sluggish reaction on this issue has been a sharp contrast. It is time for Leo Varadkar to publish the advice he has received, and immediately recoup the full amount.

“The law is clear, and always has been. I’m glad that Regina Doherty has now indicated a willingness to repay the €16,000 allowance she never should have been paid. The Taoiseach now needs to make that happen.

“He should also now clarify which two of the four super junior Ministers he has appointed will receive an additional allowance, and which two will be paid less for doing the same job.”