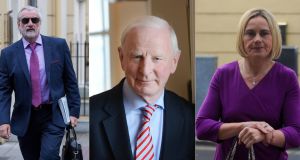 The thrust of many questions at the Oireachtas committee meeting to consider the Moran Report revolved around how former OCI president Pat Hickey survived – and the effrontery of his escapades.

And why did Hickey believe he could rule by executive order without consulting his board?

The answer goes back to the 1990s when Hickey’s public profile rose with every Olympic cycle. Each time, it seemed a minister was publicly castigated.

“The man who tried to wipe us [OCI] out was Bernard Allen back in ’96,” Hickey had said of the then sports minister. “It was all-out war.”

In 1997, he said then sports minister Jim McDaid was “divisive, disruptive and confrontational”. According to Hickey, “guys like him felt they could run the world”.

Hickey’s behaviour was toxic to the political establishment. He was the Conor McGregor of sports politics – bombastic and indiscreet. Hickey’s confrontational style both appalled and titillated the public.

In 2009, Mulvey was appointed by Mary Hanafin to chair the then Irish Sports Council (now Sport Ireland). His expertise was in conflict resolution. His brief was clear. Use your skills to decommission Hickey.

“It was no secret about how the old OCI behaved,” said Treacy. “Kieran Mulvey was directed by the government of the time – ‘no rows with the OCI’. We were dealing with conflict. Obviously, the government wanted to stop it around 2009.”

Treacy added his organisation did not enjoy political support at the time and when Hickey asked for an OCI place on the Sport Ireland board – an outrageous request in the eyes of the former world champion athlete – he got it.

“I was appointed by Mary Hanafin at the time,” said Mulvey. “I’m not saying it was a direction, but a general understanding. ‘Kieran you are being appointed because of your skills as a mediator. We don’t want rows between the Sports Council and other bodies’.”

Instead of confronting the problem directly, the government of the day enabled Hickey. Their concern was less of how he did OCI business and more about his vitriol aimed at government ministers.

While Mulvey’s influence was undoubtedly pacifying, Hickey only grew in power as an International Olympic Committee (IOC) top-table member and head of all European associations. In that realm, he was untouchable.

Hickey saw the OCI as an autonomous body and he was its keeper, referring always to the IOC charter and how it took prominence over anything that might be thrown at him in Ireland.

His public image softened, but as Keane exposed this week, Hickey – without the knowledge of the board – tied the OCI into contracts until 2026 with the now septic ticket-reselling company THG.

“It indicates to me strongly that government has been part of the problem here. What we needed was a row with the OCI,” said Cork TD Mick Barry.

Over two days of cross-examination, the little people – the volunteers, who populated Hickey’s committees and said yes – were dragged into the controversy because people rightly wanted an explanation, a reasonable exposition of a debacle.

Keane – who has almost turned the OCI around in one year since taking over – was grilled about her role in a dysfunctional committee; about why she met Hickey on April 4th; about what he said and why she knew nothing of binding contracts.

Good questions and she answered them all.

But, for culpability, a government that understood everything eight years ago and blinked is at the heart of the Rio debacle.