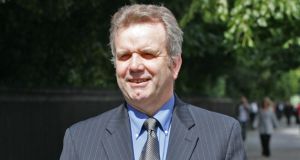 The Government’s new estimate that there are close to 10,000 Irish living illegally in the US – down from 50,000 – has been supported by a Washington-based independent research institute.

The Migration Policy Institute has estimated that there are fewer than 16,000 undocumented Irish living in the country – in line with the view of the Government’s recently-appointed envoy to the US Congress, John Deasy, who said this week that he believed the correct figure was closer to 10,000.

Former taoiseach Enda Kenny, Government Ministers and officials have regularly quoted the 50,000 figure on visits to the US and during private lobbying of Congress and successive US administrations.

Mr Deasy, a Waterford TD, cited statistics by the Pew Research Centre this week obtained during a recent visit to US estimating that the number of unauthorised Irish immigrants between 2005 and 2015 was in the range of 10,000 to 15,000. He said that he felt it necessary to obtain an accurate figure.

The Migration Policy Institute said the number of undocumented Irish was below 16,000 but could not say what the exact figure was because the sample sizes from the US Census Bureau data, which it uses to calculate undocumented populations, was not large enough to permit valid estimates.

“We have been able to produce unauthorised population estimates for the top 50 countries; Ireland is not among the top 50. The country with the smallest population in our top 50 is South Africa, which we estimate has 16,000 unauthorised immigrants in the US,” said institute spokeswoman Michelle Mittelstadt.

“So, what we can say with confidence is that based on our analysis of US Census Bureau data using [our] methodology that permits us to assign legal status to the foreign-born population, we have for a few years now estimated the Irish unauthorised population in the US is at most 16,000 people.”

Trina Vargo, the Virginia-based president of the US-Ireland Alliance, said Mr Deasy was right to question the number of Irish illegally in the US because she believed that the “oft-cited number of 50,000 has always been an exaggerated number that was never substantiated”.

The Migration Policy Institute had mentioned the “fewer than 16,000” figure to her last year, said Ms Vargo, who runs the George J Mitchell Scholarship programme for US graduates studying in Ireland and the annual Oscar Wilde Awards honouring prominent Irish people in the entertainment industry.

Mr O’Dowd, the New York-based journalist and publisher and co-founder of the Irish Lobby for Immigration Reform, said that Mr Deasy’s numbers were incorrect and that he had not looked at “the one authentic source”: official US government statistics showing the number of overstayed visas for visitors from Ireland held by the Department of Homeland Security.

The US department that is in charge of the enforcement of immigration policy says that there were 2,569 visa overstays in 2016 or roughly about 0.5 per cent of 483,613 expected departures of Irish citizens. This was similar to previous years when there were 2,113 overstays in 2015 and 2,292 in 2014.

“You can go back many years and find that number was much higher than current numbers,” said Mr O’Dowd. “Depending on a Pew report that makes ‘out of thin air’ assumptions is a waste of time.”

He also criticised Mr Deasy’s remarks last month dismissing the idea that new E3 working visas might help the undocumented Irish given that few of these Irish immigrants have college degrees or the professional work experience needed to qualify for these visas, which are available to Australians.

“Mr Deasy has already rubbished the E3 visa as a vehicle for advancing legal Irish immigration, again using incorrect information about how it could be applied,” said Mr O’Dowd.

“This is a disappointing start to a worthwhile endeavour.”