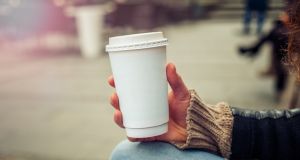 In a rare showing of political consensus in the Oireachtas, representatives from four parties as well as Independents have held a joint press conference to support a new waste reduction Bill.

The Green Party and Labour are co-sponsoring a Bill aimed at reducing the amount of packaging and waste in consumer products.

After party leaders Eamon Ryan and Brendan Howlin extended an open invitation to other parties to join them on the plinth of Leinster House on Tuesday, representatives from Sinn Féin and the Social Democrats also appeared as well as the Independent Senator Alice Mary Higgins.

The Waste Reduction Bill will be debated in the Dáil this week. Among other things it proposes that non-biodegradable coffee cups be banned from 2020, and has also proposed a deposit and refund scheme for closed beverage containers.

“Michael Martin indicated last week he will support the Bill.

“This is not a kick-the-Government motion.

“While the Government will probably oppose it and say kick it back six months, we will get it through second stage and then [hear what Fine Gael will say],” said Mr Ryan.

Mr Howlin emphasised that the motion was a good example of cross-party cooperation and said it could be extended to other issues. It was Labour who suggested to the Greens that the party could use its private members time this week (the last week of the Dáil before the recess) to present the Bill.

“All of us agree that one of the most pressing things is climate change . . . We need fundamental change and not tinkering about and that is a consensus across many parties.

“We need to stop talking about it and start acting about it,” he said.

Sinn Féin has its own private members Bill, which party environment spokesman Brian Stanley says is wider. He said his party would support the Bill but seek amendments to make it more robust.

Róisín Shortall of the Social Democrats said the Government was tinkering and allowing the waste situation to become a “free-for-all”.

She said the Bill was progressive in that it tackled waste use at its source.

“When you take messages home and put them on kitchen table, (you see) all the cardboard and cellophane and plastic that is superfluous and non-recyclable,” she said.

The Government is likely to oppose the Bill on grounds of the costs involved with an argument that the legislation, while well-intentioned, cannot be justified in its current from from a cost perspective as it will ultimately impose an over-onerous burden on consumers.