Taoiseach says Burton and adviser were ‘terrorised’ in Jobstown protest

An Taoiseach Leo Varadkar has rejected calls from Paul Murphy TD to open a public inquiry into how gardaí handled their investigation of a 2014 water charges protest in Jobstown, Dublin. 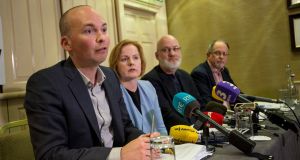 Paul Murphy TD: said there were “very serious ramification for others who might seek to exercise their right to protest”. Photograph: Brenda Fitzsimons

Former tánaiste Joan Burton and her adviser Karen O’Connell were “terrorised” during the protest in Jobstown, Taoiseach Leo Varadkar said as he rejected calls for a public inquiry into the Garda investigation.

Solidarity TD Paul Murphy who with five others was acquitted of false imprisonment following the incident, asked the Taoiseach if he would bring forward legislation for a public inquiry into the Garda investigation of the 2014 Jobstown protest.

But Mr Varadkar said that Mr Murphy and his co-defendants got a fair trial and were acquitted but that did not mean the behaviour at Jobstown was “decent or acceptable”, adding that he believed Ms Burton and Ms Connell were terrorised and “you could see the terror in their eyes” in the coverage of the protest.

The former tánaiste and her adviser were trapped in her car for a number of hours during a protest against water charges.

Mr Murphy, on his first day back in the Dáil since the trial ended last week, said there was “clear evidence of conspiracy to stitch up protesters for false imprisonment”.

The Dublin South West TD added that there were “very serious ramification for others who might seek to exercise their right to protest”.

He believed “there has been a bit of an attempt to laugh at the notion of a conspiracy” which he went on to define as a “plan by group of people to do something unlawful or harmful”.

Mr Murphy said it was a conspiracy that “three gardaí under oath up to the rank of Superintendent saying that I said ‘will we keep her here all night when I said no such thing’.”

He added: “You can talk about frailty of human memory for one or maybe even for two but for three guards to say a thing that simply did not happen.”

But Leas Cheann Comhairle Pat ‘The Cope’ Gallagher intervened and said “this is not a court of appeal or the Supreme Court”.

Mr Varadkar said the Government had no proposal to bring forward legislation for a public inquiry.

“It appears to me that Deputy Murphy and his co-defendants got a fair trial. The jury heard the case. They heard both sides of the case and all the evidence. And they decided to acquit.

“But I don’t believe that means that the behaviour we saw in Jobstown was decent or acceptable.”

He said “the way that Deputy Burton and Karen O’Connell were treated was very wrong”.

“I think they were terrorised. You could see the fear in their faces when you look at the coverage,” he said before the Leas Cheann Comhairle intervened to cut off the exchange.