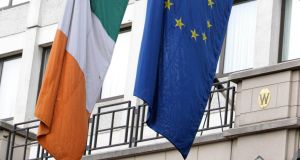 The State could seek derogations on EU budget rules and possibly dip into the €1 billion “Rainy Day” fund in order to Brexit-proof the economy, according to Senators who have compiled a special report on the topic.

The Brexit: Implications and Potential Solutions report was officially released on Tuesday following months of hearings by the Seanad Special Select Committee tasked with producing the document.

The cross-party effort included a multitude of suggestions for the relaxation of both domestic and EU spending rules to help bolster areas of the economy that might be particularly susceptible to post-Brexit volatility.

Included in the more than 100 “potential solutions” put forward over the course of the report is a renegotiation of state aid regulations with the EU “to assist those sectors likely to be most adversely affected by Brexit due to both proximity and trade reliance”.

The paper recommends Ireland should seek to work with other affected EU partners to achieve this outcome, which could involve “a large state aid exemption regime of the form undertaken during the 2008 Financial Crisis”.

A derogation from EU fiscal regulations might help free up resources for capital expenditure on infrastructure, housing and support services, it said, and extra borrowing from the European Investment Bank could reduce the reliance on domestic exchequer funds to provide such projects.

During the report launch in Leinster House committee chair Senator Neale Redmond said members were “extremely concerned” about the agriculture and agribusiness sector in particular due to the level of cross-border interconnectivity involved.

Page 40 of the report recommended a relaxation of state aid rules governing the farming and agri-food sector.

Speaking in a personal capacity, committee member and Labour Senator Ged Nash said the use of money from the €1 billion so-called “Rainy Day” fund could also be a means to stimulating capital development which would help to “Brexit-proof the economy”.

The report also put forward the prospect of “significant investment” to adapt Irish ports so they could accommodate higher volumes of freight directly from Europe.

The State should also seek to wean itself from the existing reliance on British hubs for long-haul air connectivity, with North America virtually the only distant location adequately served by Irish-based airlines.

There is also a need to agree a new “open skies” deal with the UK, as reported in today’s Irish Times, and Mr Redmond said a failure to do so would be disastrous.

“In short (no deal)would be a disaster. Flights would be cancelled, we’d be isolated, millions upon millions of euro will be lost by airlines and also by customers,” he said.

The Seanad report also explored the creation of a single education sector for Irish and Northern Irish students after Brexit, as well as an all-island economy similar to that which straddled both portions of Germany prior to its unification in 1990.

It contained warnings about a potential divergence in regulations in areas such as medication, healthcare and the environment should the UK choose to jettison EU directives in future, and recommended legislative equivalence on both sides of the border where possible.

While unionist points of view were heard in committee sessions covering farming, trade and healthcare, Sinn Féin Senator Niall Ó Donnghaile expressed frustration at the lack of input from political groups such as the DUP and UUP.

Communications between political actors north and south of the border regarding Brexit have been stilted, with DUP leader Arlene Foster previously refusing to entertain overtures from former taoiseach Enda Kenny to get involved in an All-Ireland forum on the topic.

The report will now be sent out to all EU-27 member governments for consideration, as well as Irish MEPs and other relevant stakeholders.