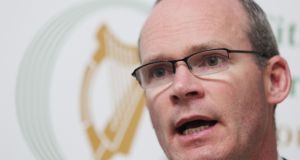 Simon Coveney has described his telephone call to an Air Corps pilot who refused to fly him to Cork as an example of his ‘hands-on’ approach. File photograph: Stephen Collins/Collins Photos

Minister for Foreign Affairs Simon Coveney has described his telephone call to an Air Corps helicopter pilot who refused to fly him to Cork because of predicted fog as an example of his “hands-on” approach as a Minister.

He said the call, which he made in 2015 as the then minister for defence, was not intended to be intimidatory in any way.

“I’m a hands-on Minister,” he told The Irish Times in London.

“In this [defence] brief, as I have been in all of the briefs I’ve had, I’ve picked up the phone and spoken to captains on ships in the Mediterranean. I’ve spoken to lead officers on the Golan Heights to understand the issues they are facing, to make sure we understand them,” he said.

“This was another example of a hands-on conversation I would have had, but it certainly was not an attempt to influence the decision or to intimidate anybody.”

In an email between Department of Defence officials, obtained by The Irish Times under the Freedom of Information Act, the Air Corps is described as being “very unhappy” about the incident on June 17th, 2015, during which Mr Coveney questioned the pilot’s judgment.

However, speaking in London on Thursday, the Minister said the reports on the incident gave a misleading impression of his management style.

“Anybody who knows me and who has worked with me would know that is not my style. I’m an energetic and at times forceful Minister, but I drive myself harder than anybody else that I work with and I have the utmost respect for the Defence Forces and the decisions they make,” he said.

“And I think that all the decisions that I took while minister for defence, whether that be putting together a White Paper for defence which included significant input from the Defence Forces themselves, or whether it be sending a ship to the Mediterranean, or supporting our troops abroad or at home, or fighting for increased budgets, [show] I have huge respect for the Defence Forces in Ireland.

“And I think it’s regrettable that this story seems to be telling a different story to that, which of course I’m not happy about, and I don’t think reflects the truth.”

Mr Coveney was first alerted to the story by The Irish Times more than six weeks ago and chose not to comment.

On May 23rd, The Irish Times sent his spokeswoman a lengthy and detailed account of the incident, which was the basis of a question submitted earlier to the Department of Defence.

The paper also sent his spokeswoman the department’s response. This response was to the effect that the department was aware of an exchange between Mr Coveney and an Air Corps pilot.

Mr Coveney was again asked to comment and chose not to.

The Irish Times did not publish the story at that time, but submitted a Freedom of Information request to the department seeking further details on its awareness of the incident with the pilot.

That request resulted in the disclosure of the email.

The memo was written by one official in the department to another and was based on information relayed to the department by a senior officer in the Air Corps that disclosed the organisation’s unhappiness at Mr Coveney’s conduct.

Mr Coveney was again asked to comment prior to publication of the story, but chose not to.