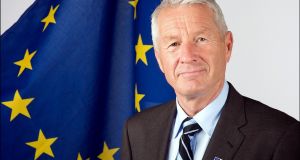 Thorbjørn Jagland, Secretary General of the Council of Europe, who was in Ireland to deliver an address on the dangers of populism and fake news

The secretary general of the Council of Europe has said he hopes the forthcoming Judicial Appointments Bill will help avoid future controversies such as the one surrounding the appointment of Máire Whelan to the Court of Appeal.

Thorbjørn Jagland, a former prime minister for Norway, was in Ireland to deliver an address on the dangers of populism and fake news in the same week the Council of Europe released a report criticising Ireland’s progress in setting up an independent judicial appointments mechanism.

The report found Ireland to be “globally unsatisfactory” in introducing anti-corruption legislation, particularly in the area of judicial appointments and independence.

Mr Jagland said he has been following recent events in Ireland surrounding the appointment of Ms Whelan, the former attorney general, to the bench. The appointment led to accusations of cronyism when it emerged that Ms Whelan did not go through the official application process and was appointed during a Cabinet meeting at which she was present.

“Fortunately there is an interesting debate on how to do this in the future so that one can avoid people saying that appointments are being politicised,” Mr Jagland said.

The Council of Europe comprises of 47 countries and is one of the largest human rights organisations in the world.

Mr Jagland said the current process of judicial appointments is a major concern for the council.

“That is why I was very encouraged by my meeting with your Minister for Justice [Charlie Flanagan],” he said. “Obviously you are now taking steps to remedy these shortcomings. That is a very, very important message for us. And we are following very closely the debate going on here on how to appoint judges.”

The Oireachtas is sitting into the summer recess in an effort to pass the Judicial Appointments Bill. However it now looks unlikely to get through committee stage before October.

Mr Jagland said he believes it is important the Bill is not rushed and that most people feel it is fair.

The Bill, which is being championed by Minister for Transport Shane Ross, would establish a new commission to appoint judges. It would have a lay majority and a lay chairperson. A separate Bill will provide for a judicial council to deal with the education and conduct of judges.

The Council of Europe is also eager to see the Government pass a third Bill which will reform ethics rules for Oireachtas members. The Bill will strengthen the legal obligation of politicians to declare conflicts of interest.

Mr Jagland said he has been told by Mr Flanagan that all three Bills will be passed by the first quarter of next year.