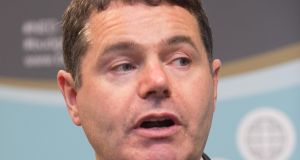 Minister for Finance Paschal Donohoe will next week deliver the Government’s summer economic statement, likely to contain an update on the fiscal space for next year. Photograph: Gareth Chaney Collins

The amount of money available for tax cuts and spending increases in the October budget is likely to rise significantly from €550 million to as much as €1 billion.

Changes in the way the fiscal space – the amount of extra spending and tax cuts permitted under European rules – is calculated are likely to give the Government extra leeway as it prepares the budget, according to people with knowledge of the process.

The total Government spending for the year is likely to be some €60 billion next year, but attention in the months before the budget will focus on the changes to spending and tax plans for the following year.

Currently the Government estimates its scope for changes to be in the region of €550 million once the cost of demographic changes has been provided for. But the public sector pay deal will cost almost €200 million a year and Ministers have been concerned the scope for new spending and for tax cuts in the budget is extremely restricted.

However, it is understood that discussions with the European Commission on the method of calculating the available fiscal space are likely to conclude with the amount of money available increasing significantly.

Three sources with knowledge of the process have confirmed that such discussions are taking place and The Irish Times has been told they are likely to free up significant extra resources in the budget.

It is expected the budget day package may expand to as much as €1 billion – almost a doubling of the presumed amount.

Officials say that calculation of the fiscal space is an ongoing process, and they are in constant contact with Brussels, which monitors the budget rules that Ireland and other countries have agreed to abide by.

Minister for Finance Paschal Donohoe will next week deliver the Government’s summer economic statement which is likely to contain an update on the size of the fiscal space for next year. Mr Donohoe briefed his Government colleagues on economic and budgetary issues at a special Cabinet meeting on Thursday in advance of next week’s statement.

In a statement, Mr Donohoe said: “While there is much focus each year at budget time on the fiscal space, or the capacity for increased spending, it is crucial that we also look at the totality of what we are spending to ensure that we are getting best value for every cent of taxpayers’ money. This will ensure we can provide the services our people need, lower the tax burden in an affordable and sustainable way, keep our economy on the right track and build a society that provides opportunity for all.”