Welfare fraudsters law changed to get it passed, says Varadkar

Deal with FF means only people guilty of defrauding €5,000 or more will be named 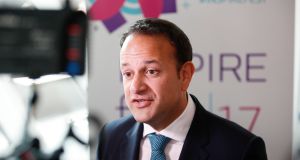 Taoiseach Leo Varadkar had to amend his plan to publish the names of all social welfare fraudsters in order to get the legislation passed. Photograph: Conor McCabe Photography

A plan to name and shame all social welfare fraudsters was amended in a bid to get the new laws passed, according to Taoiseach Leo Varadkar said on Thursday.

Before he became Taoiseach, Mr Varadkar wanted to publish a list of those convicted of any welfare fraud every three months. The plans drew a mixed response at the time and were released soon after a campaign he launched called: “Welfare cheats cheat us all”.

Under a compromise deal reached with Fianna Fáil on Wednesday, only people found guilty of defrauding the State of welfare payments in excess of €5,000 will be named in a tax defaulters’ style public register.

The Cabinet on Wednesday agreed an amendment to Mr Varadkar’s initial proposal which will increase the threshold at which people will have their names publicised.

Modelled on the publication of lists of tax defaulters, the proposals seek to introduce a new system whereby anyone who is caught defrauding the State of welfare payments in excess of €5,000 will have their names publicised.

Minister for Employment and Social Protection Regina Doherty will this week publish an amended version of measures championed by Mr Varadkar to clamp down on welfare fraud.

Mr Varadkar said on Thursday he had to change his initial plans to name and shame all welfare fraudsters on in order to have the Government’s agenda passed.

“In terms of the change that has been agreed, I think everyone understands that the Government doesn’t have a parliamentary majority so in order to get things through it is necessary that, from time to time, we make compromises, either with Fianna Fáil or, on occasion, with Sinn Fein, ” Mr Varadkar said.

“And that’s what’s happened on this occasion. It is important that we get our programme through and if we have to make compromises in order to do so, we will do so.”

“The Government is very committed to continuing to pursue and reduce welfare fraud. We do that because we want to free up resources for people who need them and people who are entitled to benefits.”

“It is a campaign against fraud and fraud is wrong, whether it is tax fraud, corporate fraud or social welfare fraud.

Ms Doherty also defended the changes to the proposed social welfare Bill which will give effect to the measure.

She said a compromise had been reached with Fianna Fáil so the legislation could be published.

She said anyone convicted of a crime was “usually reported by either local or national newspapers” and so those convicted of fraud were identified.

“I’m not turning a blind eye to anybody, let me be very clear lest you think we’re going soft on anybody that is defrauding the state of money and taking it out of other people’s pockets, is not acceptable. There’s no defrauding of the State that is acceptable.”

“We will pursue people in the court and that will not change one jot.

She said the compromise was a sign of new politics.