‘You have some hope when the door is open, none when it is shut,’ says publican 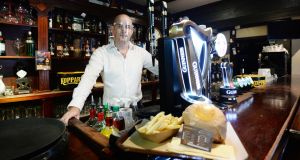 “This is a time to be as open minded as possible, to try anything and to be ready to try again,” says second-generation publican Emmet Lynch, who believes the pandemic has advanced the death of the traditional Irish pub.

The owner of what was, for decades, Hugh Lynch’s pub on Tullamore’s Kilbride Street – named after his father who ran it from 1971 until he died four years ago – has transformed it over recent weeks into Hugh Lynch’s Burger Bar.

There was already a kitchen on the premises, although it was only used in the past to cater functions in the upstairs room – beef stroganoff and rice was a popular dish for funerals, christenings and birthdays.

But when Covid-19 struck and the lockdown of so-called “wet pubs” – those that don’t normally serve food – looked increasingly indefinite, Lynch knew he had to try something radically different if he were to keep the family business alive.

Looking to gourmet burger offerings in Dublin, he decided to try out the concept in Offaly’s county town.

Rather than ambling into a front bar of regulars, or the back lounge popular with younger crowds at the weekend, customers are now greeted at the front door and guided to a socially distanced table, where they must remain unless going to the toilet or leaving.

Diners make their order by ticking boxes on a business card-sized menu which floor staff pass to the chef in the kitchen.

So far, it has been a success, but it’s not for everybody.

“Some of our older customers just want to have a drink and it was difficult at the beginning trying to explain to them that they can’t do that with the regulations,” says Mr Lynch.

“A lot of them would have been daily customers, who come in for a pint and read the newspaper, and maybe join five or six more. It was their social hub – some are quite lonely.”

Those who decide to stay for a burger are adjusting to the movement restrictions and having to pay a bill rather than pay for each pint as it is served.

Opening hours have also changed. Gone is the 10.30am to last orders day, replaced with a strict 5pm to 10pm operation.

Lynch relaunched the pub on the August bank holiday weekend but was shut down again after just nine days trading when restrictions were tightened in Offaly, Laois and Kildare amid a spike in coronavirus cases.

As restrictions eased again, he reopened this week.

Crucial to the venture’s survival will be, of course, demand – he is worried it may wane in the autumn – but also the continuance for now of the government’s wage subsidy scheme, which is due to be wound down in the spring.

Before lockdown, one person could operate the bar and adjacent off licence. For the burger bar, Mr Lynch needs two people on the floor, one behind the counter and one in the kitchen. On Saturdays, he needs at least ten staff.

Despite all the challenges, he prefers it to the alternative – ongoing closure as insurance, energy , alarm monitoring, maintenance and other costs all continue to mount.

“You have some hope when your door is open, you have no hope when it is closed.”

Mr Lynch says pubs will go to the wall over the coming weeks and months but if publicans can offer something more than a pint they might have a chance of riding out the coronavirus storm.

“If you can do that, there could be a future in the industry, but I don’t think it will look like how it once looked,” he says.

“What do the next few weeks bring? I don’t know but I’d like to think I’ll keep trying and if one idea doesn’t work I won’t give up, and try another idea.”