European Commission president Ursula von der Leyen has called on the Irish government to propose a man and a woman for the role of Irish commissioner in the wake of Phil Hogan's resignation. Video: European Commission 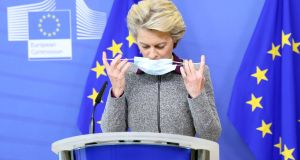 President of the European Commission Ursula von der Leyen: may opt to move the commissioner of another member state into the trade role and allocate Ireland whatever vacancy arises. Photograph: Francois Walschaerts/AFP

Urgent talks are under way to fill the coveted position of EU trade chief following the resignation of Phil Hogan, with the Government facing an uphill struggle to hold on to the powerful post.

Commission president Ursula von der Leyen raised the prospect of a reshuffle of her cabinet, casting doubt on whether Ireland could hold on to the portfolio, which is much coveted by other member states.

In a phone call with Taoiseach Micheál Martin, Dr von der Leyen asked the Government to put forward two names – of a woman and a man – for her to consider as candidates to become Ireland’s next commissioner as she pursues a goal of gender balance in her executive.

It is up to Dr von der Leyen to allocate jobs as she chooses, subject to getting the European Parliament’s green light, and she could opt to move the current commissioner of another member state into the trade role and allocate Ireland whatever vacancy arises.

“It is important for Irish authorities to come forward with names as quickly as possible,” a spokeswoman for the EU executive said.

The second-time commissioner and former Latvian prime minister, Valdis Dombrovskis, has been given responsibility for trade until a final decision is made.

The trade role is a deeply significant one, involving the daily management of affairs with the EU’s global trading partners, with opportunities to shape policy internationally through the bloc’s economic might.

Although in Ireland the role is seen as important in the light of trade talks with Britain, across the EU the position is a key prize in a struggle between member states that are pro-free-trade and those with more protectionist instincts stoked by recent disruption to supply chains during the coronavirus pandemic.

Once Dublin puts forward names, “I will decide on the final allocation of portfolios”, Dr von der Leyen said in a statement, in an acknowledgment that there could be more than one role to fill.

Some approaches have already been made to sound out potential candidates, and the Government is due to meet to narrow down the list as it sounds out what kind of figure would have the best shot of retaining a prominent commission post.

Retaining the trade portfolio is “still a hope, not an expectation” according to someone with insight into the process.

Choosing will involve a dilemma between picking a prominent politician or opting for a figure with a more technical background.

Among the names in circulation as potential candidates are MEPs Frances Fitzgerald and Mairead McGuinness, who is also first vice-president of the European Parliament, as well as Andrew McDowell, an outgoing director of the European Investment Bank and former Fine Gael economic adviser.

Catherine Day and David O’Sullivan, who have both previously served as the highest-ranking official in the European Commission, have also been discussed.

It is also possible that a member of Cabinet such as Minister for Foreign Affairs Simon Coveney could be tempted by the job. Tánaiste Leo Varadkar responded that he intended to continue as Fine Gael leader when asked if he would consider the post.