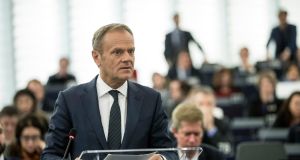 The letter to Donald Tusk was signed by the leaders of Sinn Féin, the SDLP, the Alliance Party and the Green Party and the party MLAs. File photograph: AP

More than half of Northern Ireland’s MLAs have written to the President of the European Council expressing their “grave concerns” at the “current trajectory toward a no-deal Brexit”.

They also reiterated their support for the backstop – the commitment to the avoidance of a hard Border on the island of Ireland. The letter to Donald Tusk was signed by the leaders of Sinn Féin, the SDLP, the Alliance Party and the Green Party and the party MLAs.

It warned of the signatories’ fears of the impact a no-deal Brexit would have on “our economy, our border and community cohesion”. Northern Ireland voted by 56 per cent to 44 to remain in the EU. The UK voted to leave by 52 per cent to 48.

In the letter, the politicians appealed to Mr Tusk “as leaders of local political parties who represent the cross-community majority who voted to remain in the EU”. They stressed that the proposed date of the UK’s withdrawal from the EU on October 31st is “fast approaching”, and there are fears of job losses, significant disruption to cross-border trade and checks at the Border, which they warned posed a threat to the peace process in the North.

“It is our view that the progress made in developing integrated and enduring relationships on this island, politically, economically and socially, over the last 20 years is far too important to abandon particularly at a moment when those relationships are being tested,” the letter said.

“With that in mind, and with no functioning Executive or Assembly currently in place in Northern Ireland to give expression to the democratic wishes of people here, we write to you to confirm our support for the backstop contained within the Withdrawal Agreement and Political Declaration.”

The letter said it was the view of signatories that “a legally operable guarantee to protect the Good Friday [Belfast] Agreement, maintain north-south co-operation, and preserve the all-island economy and to prevent a return to physical infrastructure on our border or physical checks at or near the border is necessary to preserve the progress that we have made”.

“We trust that the approach adopted by the European Institutions to defend all that we have achieved will continue in the weeks ahead,” the letter concluded. DUP MP Jeffrey Donaldson said the letter demonstrated “that the backstop does not have the support of representatives from both communities in Northern Ireland”.

“The withdrawal agreement fundamentally undermines the Belfast Agreement as it would erect a new border between Northern Ireland and the rest of the United Kingdom,” he said.

“The best way to protect the Belfast Agreement and enjoy a positive north-south relationship is to have a sensible deal as we exit the European Union.”

He said those “who pedal scare stories about barbed wire and soldiers on checkpoints are being irresponsible”.

“Neither London nor Dublin have any plans to go back to the borders of the 70s and 80s even in a no deal scenario,” he said.

“If the President of the European Council genuinely sees himself as a safeguard to peace and stability in Northern Ireland, then he will recognise the need to listen to the views of unionists.”