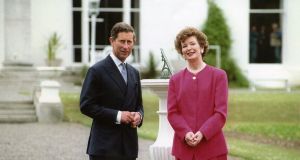 Prince Charles managed to “out-charm the Irish” during his first visit to Ireland in 1995, according to diplomatic papers which described the trip as a turning point in the history of the two countries.

However, a planned return trip the following summer was abandoned amid concerns about his personal safety, the records reveal.

Aides had made preparations for the Prince of Wales to undertake a three-day visit to the Republic from June 29th 1996, just as early talks laying the way for the subsequent Good Friday Agreement got under way in earnest at Stormont.

But secret arrangements for the “low-key” official visit were scuppered when both British and Irish officials voiced concerns about the trip.

A letter marked “confidential” from foreign office diplomat Dominick Chilcott to No 10 private secretary John Holmes revealed how Irish authorities had “expressed concern about the risks which His Royal Highness would face” if the visit went ahead without a ceasefire in place, amid renewed tensions between the IRA and unionists.

The document, released by the UK National Archives at Kew, London also signalled a possible diplomatic faux pas if the Prince used the Royal Yacht Britannia during the visit — a totem which would “be unwelcome to parts of the population”, it said.

“We share Irish concerns about security. And the benefits which this visit might bring are limited,” Chilcott said.

“The timing, on the eve of the Irish presidency [of the EU in July 1996], is not ideal from the Irish point of view. “The risks now seem to outweigh any benefits.”

He added: “Since there has been no publicity, postponement of the visit now would reduce the risk of being seen to concede to terrorist threats.”

John Major, the prime minister at the time, indicated he was content for the visit to be postponed.

The trip was scheduled a year after the Prince of Wales’s maiden official visit to the Republic in 1995, which was heralded a success despite some protests.

The then British ambassador to Ireland Veronica Sutherland said the Irish government could not have been more helpful in welcoming the royal and that the idea of the taoiseach hosting a dinner which was attended by leading politicians would have been unthinkable not long before.

“It takes brilliance to out-charm the Irish. The Prince of Wales did just that,” said Veronica Sutherland, in a declassified memo.

“Not only did he so visibly touch the hearts of everyone he met and spoke to, but he also created an opportunity for the taoiseach [John Bruton] to use his quite different oratorical skills to move the peace process forward.”

It was the first official visit by a member of the royal family since Independence and took place on May 31th and June 1st. Sutherland said that all of those attending a dinner during the visit were “well aware that we were attending a turning point in history”.

“The Prince of Wales and the Taoiseach come from very different traditions and backgrounds. But we were watching two honourable men who had the courage to say what their hearts felt. In so doing, they have moved forward the process of putting relations between these neighbouring countries on a normal footing of mutual respect and close co-operation,” said Sutherland.

Before the visit, Sutherland said that the British had been unsure of how involved the Irish would want to be. “As it was, they could not have been more enthusiastic, or more helpful and generous over arrangements, including massive security,” she said.

“In addition to the taoiseach, the tánaiste [Dick Spring] played a key role, accompanying HRH for part of the tour around Dublin. Other ministers were keen to welcome him and the minister for finance [Ruairí Quinn] was to be seen waiting among a group of three-years-olds in a crèche in order to welcome HRH to his constituency.

“Not long ago the idea of a taoiseach hosting a dinner for the Prince of Wales attended by leading politicians across the political spectrum would have been unthinkable. So too would the prospect of all 220 guests, among them the leader of Fianna Fáil, standing to toast the queen.”

A few days after the visit, prime minister John Major wrote to Bruton to thank him for taking the lead by inviting the prince.

“For you and your government to invite him, and to go out of your way to ensure the success of the visit, was a typically bold step, and you were proved absolutely right. You caught the spirit of the times,” wrote Major.

There were protesters at the event who had been bussed there from Derry, said Sutherland, and went from one location to the next following the prince. However, she said, the majority of people were there to welcome the prince.

“The overwhelmingly favourable reaction to the Prince of Wales from people in all walks of life including many who describe themselves as staunch republicans has exceeded all expectations,” she said.

“The Irish have clearly responded to the Prince of Wales’ relaxed and easy manner and everyone to whom I have since spoken has commented on his repeatedly expressed desire to visit Ireland again. The only disappointment will be when it is realised that HRH did not mean next week.”