Inconclusive discussions during fourth week of talks between FF, FG and Greens 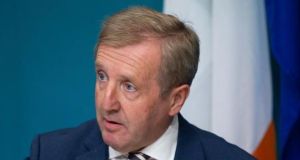 Fianna Fáil, Fine Gael and the Green Party continued into their fourth week of Government-formation negotiations on Monday with inconclusive discussions on the key sector of agriculture.

Sources said the three parties did manage to reach agreement on the general direction of EU Common Agricultural Policy (CAP) reform, and had productive discussions on the marine sector, on increased afforestation, and some change of direction for the agrifood industry.

However, the two two-hour sessions held in Kildare Street did not include a substantive discussion on the contentious matter of agriculture being the sectoral greenhouse gas emitter.

There was some discussion on live exports of cattle especially weanlings (which has an emissions component) which the Greens want to ban, which brought out what one source described as “predictable differences” between the parties.

But beyond that, there were no talks on one of the issues of the stark difference between the parties – how to lower emissions in agriculture, which accounts for a third of all greenhouse emissions in the State.

Sources said there was general agreement on new targets for afforestation, and a lot of common agreement in the marine areas. A policy for forestry could see targets of up to 30 per cent of the land in the State with tree cover by 2030, an effective tripling of the current levels.

Fine Gael was represented by Minister for Agriculture Michael Creed, Fianna Fáil by its spokesman Charlie McConalogue and the Green Party by its spokeswoman Senator Pippa Hackett.

According to those familiar with the talks, four hours was not adequate to deal with dozens of issues in a very broad area. It was agreed that the parties would need at least one further session on the areas of contention, namely the need to reduce emissions in livestock.

The Greens have not specifically called for any culls but their manifesto sets out an alternative approach to farming that would lead to a reduction in livestock, and a move towards a less intense, more sustainable agricultural industry, of which at least a fifth would be organic. The party has also called for rewetting of 130,000 hectares of bogland (which would act as a carbon sink) as well as for every farm in the country to grow at least one hectare of woodland.

The two larger parties have large support bases in the farming community. Both have opposed reductions in herd numbers, and have argued that larger emissions reductions in other departments would compensate for a smaller fall in the agriculture sectors. Both parties have put their faith in technology, particularly around feeds, which they say can lead to less methane being produced by ruminant animals.

By contrast, the Greens’ manifesto has argued for substantial reductions within agriculture in order to meet its aim of reducing emissions by 7 per cent per annum.

The focus of the first session on Tuesday will be communications and the media, with the issues of broadband, as well as the growing challenges facing traditional media forms being addressed.

The three deputy leaders of the parties – Simon Coveney of Fine Gael, Dara Calleary of Fianna Fáil and Catherine Martin of the Greens – held a separate meeting on Monday night to review progress in the talks.

A plenary or general session – involving all members of the negotiating teams – is also scheduled for Wednesday. There is general consensus it is unlikely an agreed text will be ready by the end of this week.