Politics in a fractured state as Enda Kenny departs

Overall, it’s hard to argue that Kenny hasn’t produced results for his people

Harry McGee reports from Government Buildings as former taoiseach Enda Kenny walks out of the gate for the last time, to be greeted by the media and curious tourists. Video: Bryan O'Brien 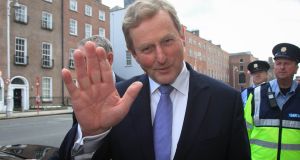 And with a wave and a smile, he was gone.

Enda Kenny is still Taoiseach in a caretaker capacity, of course, and will be until Leo Varadkar succeeds to the position some time on Wednesday afternoon.

But there is no going back now. His resignation is in the hands of the President. The Kenny era is over. But what should we make of it?

It ended slowly, for one thing. The clock was ticking for him since last year’s electoral disaster, when he led Fine Gael to the loss of a third of its seats. With characteristic doggedness he turned defeat not into victory, but into something that looked a bit like it. He waited and persevered and waited, until again the job of Taoiseach fell to him. That doesn’t happen by accident.

Once that ticking starts in politics, though, it rarely abates. It reached a climax in February when the disastrously cack-handed political management of another Garda scandal led his own party to turn to him and effectively say: now it is time.

He knew it, too. A politician of acute instinct, he usually sees these things clearly. But he deflected and parried so expertly for nearly four months, putting sufficient distance between him and the proximate cause of his departure, that it was hardly mentioned today.

And then it ended quickly, with Dáil speeches that were – for the most part – warm and funny and recognised Kenny’s 42 years of political and public service.

When Bertie Ahern left, all present in the Dáil knew that an era had ended, even if they couldn’t shake the sadness that it was ending the way it did. There was that sense of ending in the Dáil on Tuesday, but there was no sadness.

The assessments of Kenny’s career have been stacked up before now. He was a politician of the old school who realised when change was necessary; he mixed reform with continuity, a traditionalist who was a moderniser. He was dogged but pliable. He has been central to our politics for a decade and a half, national leader for six tumultuous years; and yet he never dominated the era or forced his imprint upon the national political consciousness like many of his predecessors. He was just . . . always there. Getting on with the job.

He answered the question of whether Ireland could recover from a desperate situation, and then the Irish people changed the question. He never quite figured that out.

His governments saved the Irish system, for all its faults (and they are many) and for all its achievements (so are they). But the state of politics as he leaves is fractured and uncertain.

Ultimately, Kenny assumed leadership of the State at a time of peril. He oversaw a great national hunkering down, embodying a determination to “keep buggering on”, as Churchill put it, to get through it all, come what may.

As Eamon Ryan said on Tuesday, it’s impossible to know what would have happened if a different, perhaps bolder, path had been chosen for our country. Maybe it could have been better. It could certainly have been worse, and – the experience of Greece suggests – it could have been an awful lot worse.

The judgments of history will, in time, do their bit.

Perhaps the fairest judgment for today, and the one most likely to stand the test of time, perhaps, was the one delivered by the last speaker, Shane Ross, the man who a year ago was describing Kenny as a “political corpse”.

A few hours before Tuesday’s speeches, Ross was sitting at the Cabinet table with Kenny, rubber-stamping one final political deal. Outgoing attorney general Máire Whelan is being made a judge of the Court of Appeal; Stepaside Garda station is to be reopened. More evidence, you could say, that Ross has come around to Kenny’s way of thinking.

All things considered, Ross suggested, the nation that Kenny led is now in a better place than it was when he became its leader. Is everything perfect? It is surely not. But in general, Ross concluded, Kenny’s leadership has produced good results for his people. It’s hard to argue with that.