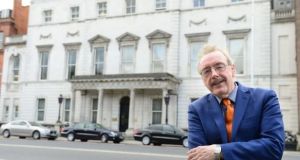 Former Irish ambassador Ray Bassett is involved in Irexit Freedom, a new political party that will launch in Dublin next weekend.

A new political party campaigning or an Irish exit from the European Union intends to run candidates in the next national and European elections.

The Irexit Freedom party will be launched next Saturday in Dublin at a conference calling for an Ireland to leave the European Union.

The new party’s spokesman is Mr Kelly, who now is head of communications for a Brussels-based Eurosceptic group comprising 40 MEPs.

Mr Bassett, a prominent Eurosceptic, will point out at next week’s conference what he claims will be the benefits of leaving the EU and its Customs Union. It would help to avoid a hard Border in Ireland and maintain frictionless trade with the UK, he will say.

Prof Kinsella will argue that leaving the EU is essential to take back Ireland’s military neutrality, which he argues is compromised by membership of EU battle groups and the Permanent Structured Cooperation (Pesco) defence initiative .

The notion of an Irish exit from the EU has only become a topic for public discussion in the wake of the Brexit vote in the UK.

All of the established political parties are supporters of the EU while Sinn Féin has moved from being an EU-sceptical party to being an EU-critical party. It is seen by some to have softened its stance to Brussels considerably since Brexit.

Public support or an Irish exit from the EU has remained very low.