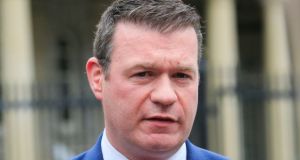 Labour Party leader Brendan Howlin has categorically dismissed the challenge to his leadership from Alan Kelly by saying the Tipperary TD has no support in the parliamentary party, and the backing of a minority of councillors.

Responding to Mr Kelly’s interview on Tipp FM earlier today, in which he accused Mr Howlin of failing to turn Labour’s fortunes around, the party leader said the comments were disappointing and an unnecessary distraction at a time when the party was trying to rebuild its support and renew its image and policies.

“There is not a single other parliamentary party member who supports the challenge. He [Mr Kelly]has the support of a minority of councillors. We have had no formal proposition to the Central Council (which would deal with any formal leadership challenge),” Mr Howlin told The Irish Times.

“These things are entirely premature. Most people in the party want us to get on with the job and certainly do not want us to go down the rabbit hole of some contest,” he said.

Mr Howlin, who represents Wexford, said he has tried to contact Mr Kelly twice by telephone but understood he was at a funeral and would speak to him later in the day.

Defending his style and mode of leadership, Mr Howlin said: “I know I have the support of everybody else in the parliamentary party to continue with the job.

“We are all working very well with councillors, with every member of the party to build the party again and that’s what we are all about.

“The objective we took on two and a half years ago, we were under no illusions about it. It was no easy task but we have made progress and we will continue to make progress if we work together.”

Earlier, Mr Kelly told his local radio station that Mr Howlin was not the right person to lead the party.

“I think Brendan needs to consider what is best for the Labour Party into the future,” Mr Kelly said.

Mr Howlin has been leader of the party since 2016 following the party’s disastrous performance in the general election, when it lost all but seven of its Dáil seats.

During the summer a number of party councillors said Mr Howlin’s leadership should be discussed by the party ahead of the next election.

The majority of the parliamentary party defended his leadership but Mr Kelly, who has strong leadership ambitions, was conspicuously silent on the matter.

He broke his silence on Friday with criticism of the party leader on Tipp FM that amounts to a leadership challenge.

“We need a radical shake-up. We need to change the direction of the party. We need a different vision. We need far more energy”.

He said Labour was no longer connecting with the public.

He said Labour candidates for the next general election needed to be in the strongest possible position but the evidence, from his point of view, suggested that was not the case.

Mr Kelly sought to challenge for the leadership in 2016 but failed because he could not muster sufficient support from the parliamentary party.

”If the [LEADERSHIP]position was vacant I’d put my name forward. I can’t give out my vision of where I believe I would go,” he said this morning.

Mr Howlin was not reachable for comment on Friday. He has invited councillors to speak to him on a one-to-one basis if they have issues around his leadership. The matter is also due to be discussed at the parliamentary party think-in in September.

A group of 14 councillors who signed a letter calling for a meeting with Mr Howlin to discuss his position had wanted to hold the meeting as a group. Some are now organising a fresh letter rejecting the Wexford TD’s proposal.

Their letter followed another from 16 other councillors who supported Mr Howlin.

“I know I am working as hard as I can in Tipperary. I know I’m working nationally and locally as hard as I can and I know a number of other people are as well and we’ve so many good candidates around the county.

“But we need to change the way, the direction of the party. We need a different vision. We need far more energy.

“At this moment in time that is not happening, and I’m not seeing anything to make it happen, so it does need that significant change.”

Mr Kelly’s challenge to Mr Howlin has been condemned by a number of party colleagues who have described it as “disappointing” and “inappropriate”.

Westmeath deputy Willie Penrose said the comments were “not appropriate at this time”.

“I am seriously disappointed. It is not in the interest of the Labour Party or of the parliamentary party. We need a united focus of rebuilding with new strategies and policies.

“I wish this sniping would stop and we would concentrate on housing and health and not this distraction,” he said.

“We have a parliamentary party meeting on September 16th and Brendan Howlin says he wants a broad open discussion on leadership.

“I want to be talking about the real issues and not the leadership of the party. We have a leader who is democratically elected.

A leadership challenge to Mr Howlin would require the support of two-thirds of the Central Council, which has about 50 members, comprising all sections of the party.